Back in 1981, I was awarded a “Diploma of Creativity” from the University of LEGOLAND as well as an invite to a big Lego convention in Manchester. 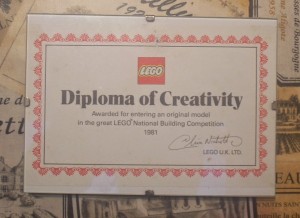 The regional heat of the competition was hosted by the local toyshop in Buxton which I think was at 42 High St which is now Scrivener’s Books. Please let me know if you remember this?

At the time technical Lego was a big thing and everyone was making car chassis, I was no exception. My parents got me to read the entry guidelines and one of the comments was it should be an original idea. Not convinced that my particular design of car chassis “was original” I was persuaded to go for an alternative design.

My construction was a working watermill, sketched below from memory. 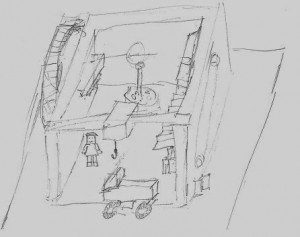 Down one side was the waterwheel, the motor powering it was hidden in the wall. A shaft connected across the top of the building and via gearing split downward to power the millstones. It continued across to power a conveyor up the other side of the building. The millstones were 40 tooth large gears and the conveyor was made from chain links. At the front of the mill was a sliding gantry crane and a simple truck was parked at the front. A “miller” mini-figure was added along with some sacks borrowed from my model railway. The model was a mixture of conventional Lego bricks for the building and technical Lego components where necessary. I think there was a set of steps up to the top of the building.

I’d gone to a lot of effort to ensure my brick were all the same colour for the walls and also had to build within the size limits of the competition specification. I remember the conveyor being difficult to tension correctly and fitting everything into the space was a challenge.

There were three finalists in each age group, I was in the older group. The other two finalists in my group were both car chassis. I rather had the edge on originality when it came to judging. I won a large box of Lego and met some dignitaries from Buxton too.