Whilst I was getting the Christmas decorations out of the loft I found a box of old electronics. Along with these was a board I bought a few years back for a project that was later abandoned. 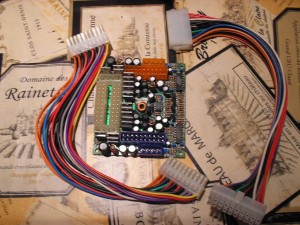 It’s an ATX power splitter. It connects to a PC power supply and gives 2 outputs. Now the clever thing about these outputs is that they can be independently switched on and off in the same way as a usual PC power supply works. I think the 3rd connector is a thru connector which is un-switched.

I don’t have any documentation other than this little grid with the power ratings.

I’ve got 2 of these and I’m unlikely to ever need both so I thought I’d give one away in a competition.

The competition is fairly easy, you just have to leave a comment below with your idea as to what you might use one of these for. I’ll then choose the idea I like the best and post you the board and cables. UK residents only due to postage costs. Obviously I’d be interested to hear how your project goes but that’s optional.