Sheetmetal working is something that I’ve recently taken an interest in. A gift from work gained me a few pieces of equipment to allow me to expand my skills in this area.

One of these is a small set of disk shears designed for steel sheet up to 1mm thick. These work by having a driving wheel with lots of small teeth to grip the metal and a lower sheer wheel. The upper wheel is driven by a handle and ratchet mechanism. This pulls the sheet between the two wheels shearing it. The tool comes with a limited manual containing safety instructions and exploded diagram of the shears.

I had a practice with these with some thin zinc sheet and they worked really well. When I swapped over to steel things started going wrong.

When trimming one of my practice welds, 2 small 1mm steel sheets butt welded together the driving wheel climbed on top of the lower shearing wheel. This jammed the mechanism. I managed to free this up. I discovered that there was a cam mechanism that raised and lowered the lower wheel and that the lower wheel had dropped down. The lower wheel was raised back up and the allen key screw that held the cam in place was tightened. 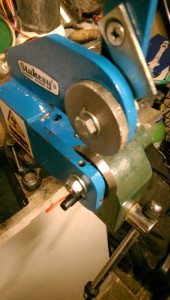 I then tried with an old piece of stainless steel. This was not entirely flat and that caused the driving wheel to slip. When flattened out it worked again but quickly jammed. This time I could not free it and something internal broke meaning the ratchet mechanism stopped turning the driving wheel.

At this point I was not happy that I’d just broken my new tool. I stripped it down and quickly realised that there was a clever design feature in the shears. A small 4mm x 20mm pin connected the ratchet and driving wheel. This sacrificial component had sheared to stop the tool getting damaged. 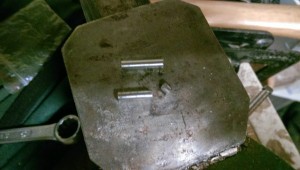 I cut a new pin and reassembled the shears. I also noticed that the cam pin had a circlip holding it in place and this was not in its correct position. This was reclipped. I tested on thin sheet and the shears worked correctly, the thicker sheet caused the same problem as before, although I realised before causing damage.

There seemed to be two issues with this tool. Firstly that the cam moves out of place causing the wheels to separate. Secondly that the wheels move out of alignment with the driving wheel climbing over the shearing wheel. For the time being I will only use this with thinner sheets but hopefully at some point I’ll have a chance to revisit and make improvements. I also hope to make a mounting plate so that it can be held in the vice more effectively.