My first problem was finding a supplier for the stainless steel. I quickly discovered that I was not going to be able to get a 38mm round bar and that sheets did not come in 3.5mm thickness. There were suppliers of 3mm sheet (mostly 1m by 2m). I checked with Dad and he accepted that a 3mm washer would work. Also whilst looking for the suppliers I found that there were different grades of stainless available, my Dad suggested 316 which is the favourite for marine stuff items, I found someone who could supply an offcut of a size that I could use, MetalsDirectUK on ebay so luckily I don’t have a workshop full the the brim with stainless steel sheet.

I knew that I was going to have to bolt this to a makeshift mandrel of some form as I’ve still not worked out how to remove the lathe’s chuck to swap it for a faceplate. I’ve nothing to clamp it with yet anyway so I’m not sure if it would have been a better solution. 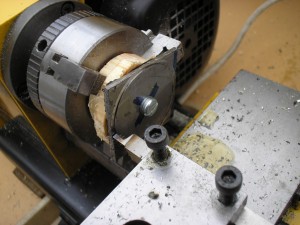 I tried a technique from a Model Engineers Work shop 136. In an article by John Slater called “Making Solid Swarf” he described how you can use trepanning to cut a circular slot through your metal. For me it did not work, too much chatter and a tendency to jam, possibly did not help that I was working right on the edge of the metal. After 30minutes and only 0.5mm through I abandoned this technique. I’ll definately give this another go if I have any brass or aluminium plate to machine.

The wooden mandrel I was using also was causing a problem with slippage and movement. This may have been the cause of some of the issues just mentioned. I swapped to an aluminium mandrel made from some scrap from another project. The stainless steel was roughtly sawed in to a round and then used a more convential turning technique to cut the outside. 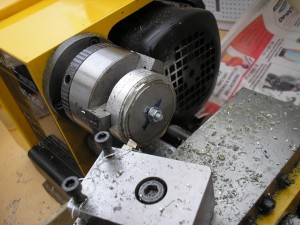 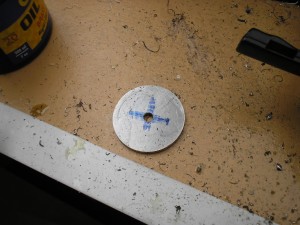 This did the job nicely so I drilled and bored out the centre to the desired size without incident. Care is needed not to try to machine the chuck jaws, the lathe provides a little bit of clearance in the middle but if you slip then you could be into the jaws. You also need to be careful with clamping large items in the chuck as the jaws will catch the bed if you open them up too far. I like to give the chuck a spin before starting it up so that I know it’s not going to catch. 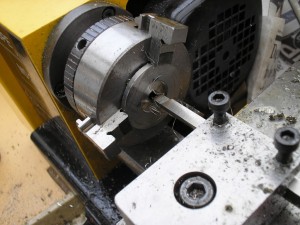 The stainless steel is not actually too difficult a material to machine, I found that I could be quite agressive with regards to how much metal could be taken off and this did not affect the finish. Lots of coolant was used so it was a big clean up job afterwards. The opinion on the web is that the 300 series is not a problem but the 400 series is a bit of a pain.

I’ve popped the washer in the post, I’ve no idea what it’s for so I’ll be following the Honey Bee / Crunluath blog to see if it gets a mention.