There are quite a few examples of the Weasley Wizard Family Clock which has multiple hands to show the locations of the different wizards in the family. The best example I’ve seen is Brad Collette’s “The Magic Clock” and inspired the mechanism for my own clock.

Over at the Tindie Akafugu Corporation they have also been looking into fiction for ideas. They have a Vetinari Clock based on a standard clock module with a modified tick.

The Twitwee clock has a LCD display which normally shows the time in the form of an old fashioned cuckoo clock, when it recieves a message from the internet it swaps to display the message. 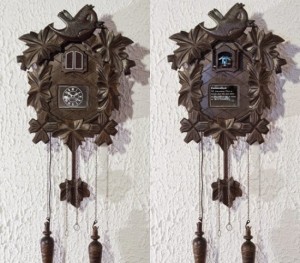 I can definately recommend googling for “Microcontroller Cuckoo” as there’s lots of other interesting modifications in this category such as Joe Meiser’s Robotic Vulture.

An example of non linear numbers is this “F-Stop” Watch, however the mechanism runs in a conventional manner.

Over in France back in the late 1700s they altered time completely with the concept of decimal time and a 10 hour day. I believe this is really just the renumbering of the dial and the mechanism and hand movement has not changed. If you know if the inards were changed too, please let me know. 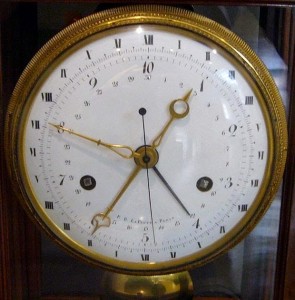 Also worth mentioning is the Bulbdial from Evil Mad Scientist, this uses LEDs to create shadow hands around the dial.

My final find is from Brett Oliver and is more radical in it’s thinking and has three analogue volt meters to show the time. Although Brett did not come up with the idea of using volt meters to display the time his clock is very stylish and has a very detailed write up. 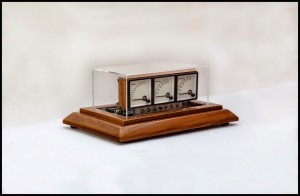