Stuart from Tool Guyd mentioned some slotted metal cubes that can be used to help keep your cables under control.

He made a statement about how he wasn’t sure how you could make one of these without a mill and that fired up big discussion about the different ways you could make them, and he challenged people to have a go making some.

I decided to take up the challenge and make some from steel bar using just simple tools. It’s not that I need a cable cube but I thought it was a nice exercise to practice my hand metal work skills. I did not have any 1 inch bar so mine are quite small at 1/2 inch, they are not really weighty enough to hold wires in place but it has allowed me to demonstrate the techniques for making them. To prepare the bar, I filed the end flat and square. Then using a permanent marker I drew on thick strips of blue where the marking need to be. 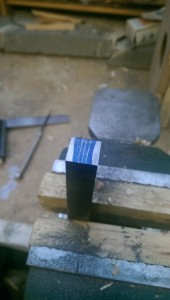 Using a scriber, rule and square the centre line and lines for the slot were marked and a line on each side for the depth. A slot was cut down each size using the hacksaw. A little clearance was added. 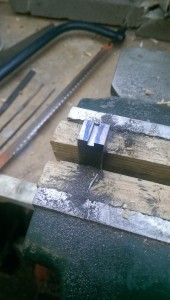 A diagonal cut from each size was used to clear the bulk of the waste in the middle. A needle file was used to square up the slot. The bar was moved in the vice so that it could be sawn to length. 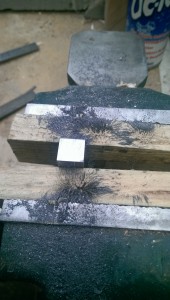 Finally a repeat of the very first step the face was squared off. 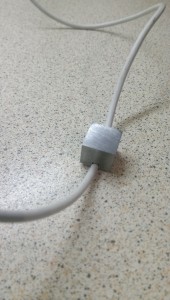 Here’s the end result after about an hours work. I suspect if I had a bigger bar it would take longer to make as there would be more to cut and file. But it’s an easy enough task if you take your time and allow enough extra metal when sawing so that you can file it square.