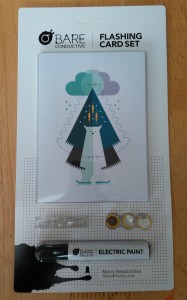 Thanks to Rachel Lancaster from It’s All Geek to me I’ve had the chance to try out the Christmas cards from Bare Conductive.

The set has three cards, a Santa, Flash (Rudolf’s lesser known cousin) and a Polar bear. There are also three LEDs, three button cells and a tube of “Electric paint”. We decided to give them to some local relatives as I was concerned about sending these through the post as they might get damaged in transit.

In my kit the leds were different colours so if you have a preference for say a red nose for the reindeer then you would want to check the LEDs before inserting into the cards. I’ve a multimeter that tests diodes but you could also quickly tap the LEDs on the cell as long as you don’t leave them on too long.

My little helper found it quite hard to squeeze tube so that was a bit of a team effort.

The last thing is hinted at on the package, the paint does not conduct until it is dry. So you’ll have to wait about 15 minutes to see if you’ve got it right. 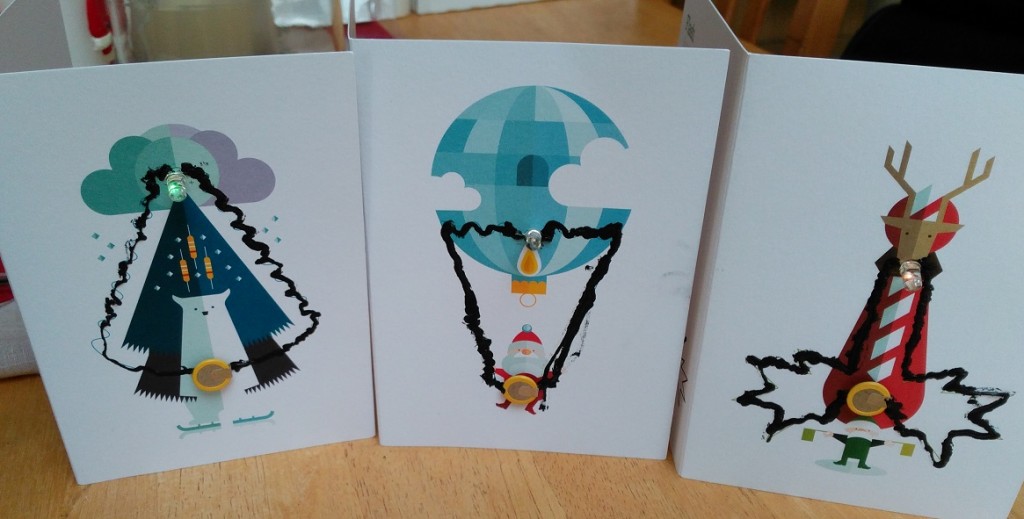 Since these have sat on the sideboard for a few days I can also observe that they are a little fragile. I tried to make some envelopes for them and managed to break the circuit in the process. A bit more conductive ink solved the problem.

I had a call from my Dad at the weekend, a table had broken and one of the bolts had stripped out of the wood. We discussed if various glues might work but concluded that a threaded insert would work best. He grabbed a bag from the local screwfix and fitted one of them into the leg. He now has a solid table again.

One thought on “Conductive Paint and Threaded Inserts”