At the beginning of the year I was approached to look at a new electronics board. It was officially announced last week so I can now tell you about it. 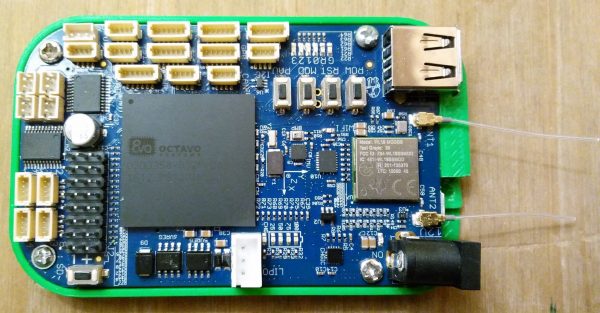 As you might spot from the picture there’s no HDMI connector here and just a single USB. That’s because the Blue is not designed to be locked to your desktop, it’s designed to be roaming free.

Along with the Octavo Systems OSD3358 1GHz ARM® Cortex-A8 there’s a few extras. There are controllers for 4 motors and a 8 servos. These are driven from the programmable real-time units which means that you don’t need to worry about the operating system interrupting things. It also means that the board can do things that others might struggle to do, such as driving a 2 wheeled balancing robot or UAV.

This board makes a great controller for a UAV as along with the servo and motor control there is a 9 axis inertial measurement unit, barometer and both Bluetooth and Wifi. There’s also a in-built battery charger so that you can charge up LiPo batteries without having to disassemble your project.

Although this is a very new board there is some code and examples already available. This is because the board is based on the Strawson Design Robotics Cape. The new Blue uses the same JST connectors which are popular with RC modellers although something new for me.

I’ve been working on a new silly project that takes advantage of all of the servo connectors. Here’s a sneak preview.