Those who have been following Workshopshed on Twitter may be aware that I’ve a project to repair a childs toy train. This was purchased non-working from a charity shop and is electrically driven. I’ll post up a separate article on diagnosing and repairing that once it’s complete. 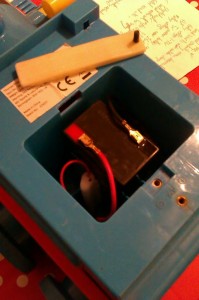 When I removed the 6v battery I checked it with a multimeter it had a feeble 1.72v unloaded. I quizzed a few people on twitter and Andrew and Alan both suggested charging it and see how it reacted, in particular checking that it did not draw excessive current. Alan also suggested that I needed a constant voltage supply to charge it.

However I did not have a suitable charger, Alan suggested they were quite simple so I googled for circuits and found Myra Van Inwegen’s article on a 6v sealed lead acid charger. This uses the L200 regulator which has an option for current limiting which is ideal for a charger.

I thought this chip sounded familar. I had a root in my box of bits and turned out an assembled Maplin kit for the L200. I’m not sure what I planned to do with this but I must have been keen because I bought two. This kit needs some form of supply and as Myra mentions this needs to be approx 2v higher than the charging voltage. In it’s current form you’d want to use a regulated supply but you could also add some smoothing capacitors on the input side and use an unregulated supply. All I had was a 12v one that I’ve been using for my Arduino Uno experiments. 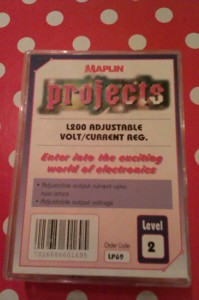 I lookedup the specification of the Uno to see what kind of power socket I needed to get for my supply, which turns out to be a 2.1mm centre positive connector. I purchased one of these and a 0.56Ω 10W resistor for the current sensing from the local Maplin. I also found an old PC heatsink (perhaps 486 or Pentium) and cut it into two, one part for the regulator and one for the current sensing resistor. I used some old biro tubes to make standoffs for the pcb and bolted that into the box. The heatsink was tapped so I could mount that away from the edge of the case with some M4 bolts. 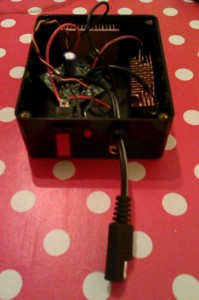 I added an LED and on off switch to the box and wired up some big crock clips on the output. These conveniently came with an inline fuse as they were from a solar trickle charger. 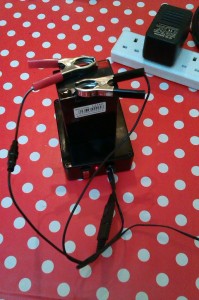 When I first powered it up (unloaded) I adjusted the output voltage to 7.22v (I was aiming for 7.2v but it’s not a very sensitive trimpot). I then hooked it up to the battery and checked the voltage across the sense resistor to make sure it was not drawing too much current. This was very low so I was happy.

I left it running through the day, monitoring the voltage on the battery and checking it was not getting too hot.

The resulting graph of voltage against time is roughly what we’d expect for a lead acid battery.

It’s a 4.5AH battery and seems to be taking charging current of 0.1A so that would suggest 45hrs to charge. After 12hrs it’s upto 6.13v and I hope to keep charging till get to 7.2v so it could be some time longer before I get a fully charged battery. I also have concerns that the battery is not holding it’s charge properly as when I monitor the voltage it does tend to reduce even though the multimeter should have quite high internal resistance.