Jimmy Shaw brought up an interesting discussion on twitter the other day about where to draw the line for advising viewers.

My thought was that this specific item should have been mentioned. The reasoning is that most people think of plastic bowls as being something you might eat out of and there’s not much in the way of information on the printers or filament that tells you that you should not.

Just to clear things up the reason for these not being food safe is two-fold. Firstly that the materials and mechanisms used may contain small amounts of toxic chemicals. The other is due to the really fine layers of the prints which could develop a build up of bacteria or mould from the foods. A similar example was a college where we had pewter tankards to celebrate our achievements, we had to be told not to put cider in them which dissolves the inside. I had no issues about drinking ale in mine. Not everyone is an ale drinker but even an orange juice in a pewter tankard is a bad idea.

What is common sense?

Johnny gave an interesting anecdotal example of the blacksmiths. Having attended a blacksmith’s training course and seen someone burnt I don’t agree with this one. The person who got burnt was a journalist who was covering the course for an article. It would not be expected that he would know much about metals, although he did have exactly the same safety briefing as the rest of us. He picked up a black metal bar, having forgotten that this was the one he’d been previously heating in the fire. The issue with blacksmithing is that that you might have two identical bars and one might be 100°C and the other room temperature. You can’t rely on a visual check alone which is perhaps not totally intuitive.

William brought up the example of fast food coffee. I think the issue here is not that coffee is hot but how hot. What happens is that some people buy their coffee and then take it to their office to drink. So the initial temperature and insulation work together to ensure that it is drinking temperature at destination. This is contrary to having coffee that you can drink when you purchase it which is the case at some other restaurants.
I’ve had that at restaurants where a child’s meal was brought to the table at such a high temperature it could burn. We’ve actually had to send them back to cool down a couple of times. Now our daughter is a bit older she knows to wait but that was not the case when she was younger. 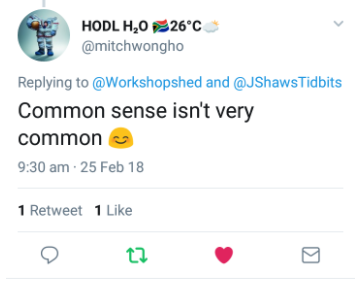 Mitch summed it up nicely, “Common sense is not that common”. There’s two factors to this, firstly some people are not as smart as you and the other that people may not have had the same experiences as you.

Kevin thought it was the responsibility of the viewer to keep themselves safe. He also raised the slippery slope argument. I’ve also heard the argument that once you start putting signs or warnings up then you become liable if there are errors in that advice. I’d be interested to know if there is any legal examples of that happening.

“I am very much in favour of H&S of the common sense kind for those who have it, and draconian rules, and PPE for those who don’t.
However, I also think that if you are going to use PPE, then at least use proper PPE and use it correctly.”

Alex Eames thought
“Personally, I detest health and safety cops but am a strong advocate of personal responsibility and common-sense.

The problem is, there’s a lot of thick people out there. I think it’s wise to mention the hazards and the steps to protect yourself.”

In general Jimmy’s twitter followers disagreed that you would need to cover this item but the wider maker community thought it was probably wise.

As I write a few tutorials and also instructions for people at work, I do tend to think about what can go wrong and so I personally er on the cautious side.

What do you think? Tough love or cotton wool?

2 thoughts on “Responsibility and common sense”