Latest from the Salvager 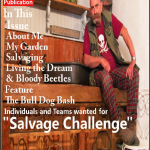