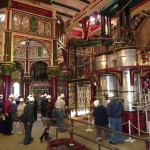 Back in September 2011 Martin visited the Crossness Pumping Station, built by Sir Joseph Bazalgette and officially opened by the Prince of Wales in April 1865. Martin Evans: This was the Victorian’s solution to London’s sewage problem. The basic idea

Thames Water has been in the news recently about their plans for a Thames Tunnel running down the river. Not to be mistaken for the other Thames Tunnel which goes across the river at Rotherhide. This giant 7m diameter tunnel