From disk drive to slabs

A tip from the Home Foundry and Casting group, indicated that you could get some good quality Aluminium from old computer hard disk drives. Compared to the other options of drinks cans (too small) and old car parts (too big) this seemed just the right thing for my flowerpot furnace. The disk drives are fairly easy to strip down but you may need a torxs driver to shift remove the screws. This one used T9 and T8 screws. It was a quick job to remove the circuitboard and motor so they could be sent back to the supplier of the drive 2020 media a popular hosting web company as spares. I also salvaged a small magnet, a large magnet, and a bearing as potentials for future projects. The laminated pressed sheet steel from the top of the drive was of little use because of it’s shape. 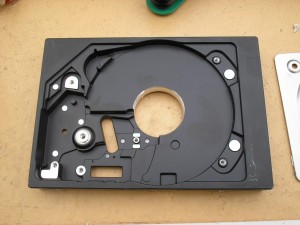 The resulting metal was sawn into 4 pieces so that it would fit into the crucible. It was weighed and the volume was measured using an old technique from Archimedes and a plastic measuring jug of water. My values were: 220g and approx 100cm3 which allowing for the tolerances of my measuring techniques the density calculation of 2.2g/cm3 is pretty close to the expected value of 2.70g/cm3. 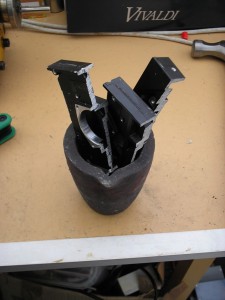 The platters from the disks have some interesting properties, they initially appeared to be glass and when a blow torch was applied (approx 900oC) no effects were visible. However when I bent them they did not snap but the surface did craze and crack. Sawing into them demonstrated that these were also aluminium with a thin surface. They were broken up and added to the pile of scrap for the furnace. Along with the disk drive chassis, the other items melted included the offcuts from the last melt and the platters (which melted just fine), once this was melted, I added lots of swarf from the Amp feet project (pushed well into the melt) and a crushed beer can (smokey because of the paint). The total amount of metal cast was 300g.

The casting this week were made larger and talc was used to allow the patterns to release from the sand more easily. You can see them below in comparison to last week’s machined block. Top left is a “ingot” with letters on it, this did not come out too well but still better than the last attempt, which got machined into the block. This could still be an issue with my sand, drier than last week but still stuck to this pattern. I’d painted the pattern with car spray paint and coated it with talc to stop the sand sticking. On the right were attempts to make a bar and a plate. The plate came out very well except that the sand came loose from the mold when it was moved leaving a crack across it. I should be able to make a 100mm x 10mm x 35mm plate from this. The top right was a shallower mold and it should be possible to machine a 60mm x 10mm x 10mm bar from this.

An attempt to cast directly into air setting clay was a failure as the clay burned when the metal was poured and wrecked the melt in the process.

3 thoughts on “From disk drive to slabs”