Lisa Anne Auerbach from the Journal of Aesthetics and Protest raises the idea of “Don’t Do it Yourself” which has not surprisingly got their backs up at Make Magazine.

She raises the concern that by attempting to “Do it Yourself” we are wasting resources, creating disasters, stockpiling tools in our sheds and putting true artisans out of business.

She did of course miss of one important not to DIY which is to keep safe. DIY is one of the major causes of accidents in the UK.

I agree with some of the points that are being made. It is easy to be come obsessed with the acquisition of more and more pieces of equipment and tools. You need to think about how jobs can be done with existing tools and look for general purpose tools rather than specialist ones. Some jobs are too big or complex to be done by the average DIYer, don’t forget about certificates and safety. Bartering can be good, in fact a lot of the workshopshed project have been done on that basis. And finally, yes, I agree that it takes time to learn skills and sometimes it does cost money to buy the right materials or tools.

However, there are many jobs around the house and garden that I believe can be done your self. There are many reasons to do DIY; for small jobs it’s often cheaper, the jobs can be done when you want them not when others have the time to fit you in, you have control over the results and process. Finally and most importantly, it’s enjoyable.

1) Re-decoration following the installation of new boiler
2) Installing some new ceiling lights in the lounge.
3) Building a bench for the workshop. 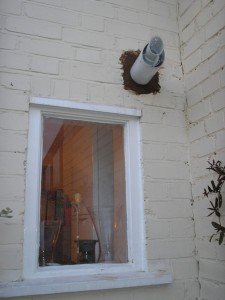 Starting with the boiler and redecoration. The actual job of installing and setting up the boiler needed to be done by a professional. He has the right tools for the job, has the training to do it safely and can get all of the paperwork so that I would need if I ever sold the house. The redecoration consisted of three parts. Filling up the hole around the flue, repairs to the boxing on the inside and a repaint of the boxing. If I’d got a builder, carpenter and decorator in to do these jobs it would have cost an absolute fortune. I might have found a handy man to do the job but that would have implied it did not need a specialist and hence that I should have been able to do it myself anyway. A carpenter would have wanted to replace the existing boxing so I may have ended with a higher quality job but again with an additional cost. The carpenter would have also had a router and hence would have been able to complete the job faster than me as I cut the shape using a handsaw and a round surform, which are tools that I use very regularly. I’ve ended up with some spare mortar and a spare piece of aerated block but I’d be surprised if they don’t end up in a project before too long.

My new ceiling lights were bought at the local DIY superstore to replace some mismatched ones which were also a bit too low. They weren’t Lisa Anne’s chandeliers and I did not need more than a basic knowledge of electrics to fit them. I did however need to add some spacers onto the ceiling batons to put them in. The job needed a small screwdriver and a handsaw to cut the spacers, I used a drill and a bradawl to put in the screws, again, hardly specialist tools. It took me a few attempts to get the spacers quite right but the results are reliable and sturdy.

Finally the bench for the workshop. I could have bought something or comissioned a carpenter to make something but at what cost! Yes, it would have been better made, my use of dowels has been critised on one forum as being not proper woodworking. However unless I went down the costly bespoke route, I could have ended up with something that did not quite fit the shed. It’s a simple design and has proved to be strong, it’s also shown to be flexible in it that I’ll be adding a new cupboard over the next few weeks.

So I’d suggest that Lisa Anne Auerbach’s DDIY concerns are not really the case. Less resources were used by the DIY projects than if professionals had been brought in, no disasters are expected, the tools in the shed are nearly always in use and the artisans are still brought in when there is something that requires specialist skills or qualifications hence they should get paid more per hour worked.