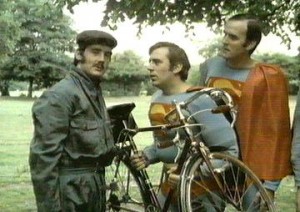 Quite rightly, the Monty Python team saw the bicycle repairman as a hero. One such hero works under the railway bridge by Embankment tube in Action Bikes with this wonderful workshop. 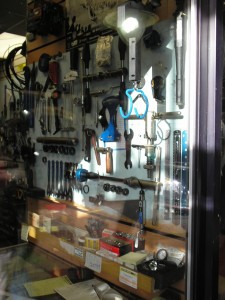 One of the things I like about bicycle repairing is that it has a lot really specialist kit such as spoke spanners, pedal pullers and chain tools. Whilst I was at college I got quite good at repairing bikes and in the process collected a range of such tools and spent some money on some good spanners which I still have to this day.

At college I had a really cheap raleigh bike, bought from brick lane with a single gear and freewheel, less to break and less to be stolen. After leaving college I stripped the bike down and cleaned all the parts. I asked the bike shop in Bath (also under the railway) to respray the frame and also to put a hub gear onto the back wheel. That bike in it’s new racing green livery was put to good use by my father for a few years.

The bottom bracket bearings on my racer took some punishing on the hills around Bath. So these were changed a few times and that’s one area I got to know quite well. One tip is rather than using the ballbearings in a cheapo ballrace to remove them from that and add an extra ball. Pack them in with lithium grease to hold them in place whilst you tighten up the bracket, you will get a lot more use out of them without the race. The race has a tendency to break up after time and then grind the bearings down rapidly.

Because they are used outside, bicycles are exposed to the worst of the elements so I also got good at removing crud from them and keeping them rust free. If you are a fair weather cyclist then it’s definately worth spending time cleaning down before you pack your bike away for the winter. You can also partially disassemble the bike to save on precious storage space.