Thanks to an Axminster Gift token I’ve treated myself to a small cross-vice. I plan to use it for drilling holes accurately and for light milling. A drill press should not really be used for milling as sideways pressure will put uneven wear on the bearings and could cause the chuck to come loose and fly out so I don’t plan to use it too often in that way and I can always mill in the lathe instead. 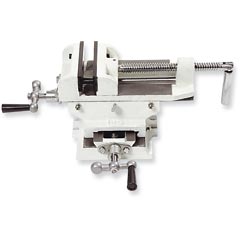 I’ve previously looked at using a cross vice versus a compound table and have quizzed a few people who also have used a cross vice. Something also struck me which is if I need the flexibility of a table then I’m sure I can make one that would fit into the jaws of the vice.

When the vice arrived I discovered it required a assembly so inspired by the idea of the Kindle unboxing or the Ipad unboxing, I thought I’d do the same for the cross vice. The box contained an exploded diagram a little like an early Meccano set, luckily when I got to open it up the assembly was not quite so involved and basically required me screwing the handles on. There was a little grease on the vice for transport but nowhere near the amount on the engineers vice I also bought so not much cleaning was required. 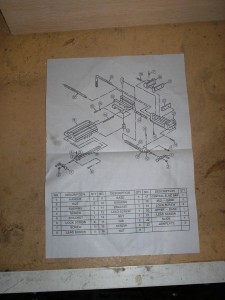 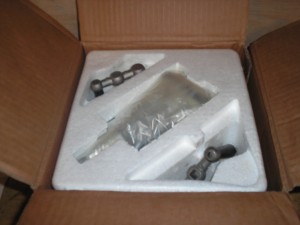 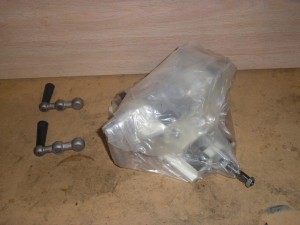 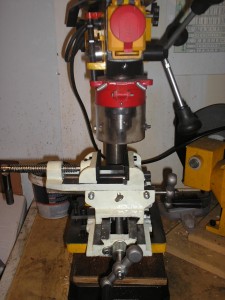 The official specification is as follows:

However you could potentially get more travel out of the vice, I measured 85mm x 65mm without the slides running off the end of the tracks.

I bolted the vice to the drill stand and did a couple of quick tests with milling some aluminium and drilling holes in a straight line in a block of wood. 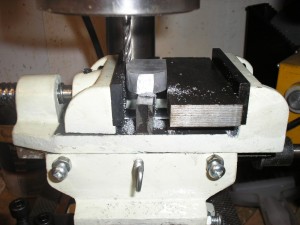 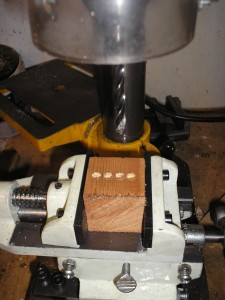 As you can see the results are not too bad. However my main issue is the size of the vice compared to the size of the drill. There are a couple of critical measurements, the first is the length of the vice (including screw) compared to the distance between your drill vertical support and chuck. If you don’t have enough, more than 180mm for the SCV3 cross-vice then you won’t be able to use the long axis of the vice left to right on the drill table. On a related note, to use the vice in that orientation you’d also need left right slots on your table as the clamping points are on the long axis. 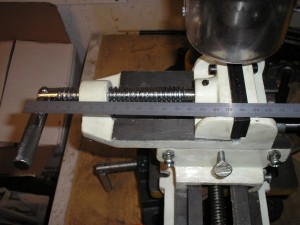 The other critical measurement is the height. You will need clearance from your table to the chuck. You need to allow for the work piece and the drill bit/milling cutter and the work piece. The maximum height on my drill is just 160mm which could be a little limiting.

When clamping the vice to the table you need to ensure there is clearance for clamping bolts on the side with the vice lock, as you can see from the photos I used a cap head bolt on that side which gave plenty of clearance.

The slideways are roughly finished so I’m guessing that would affect the accuracy if positioning. Each turn of screws moves the vice 3mm and there is a calibrated collar in 1/10mm markings. However there is no registration mark so again accuracy is an issue. I’ll add my own mark with some paint and a scriber. There is significant backlash on the screwthreads which need not be an issue as long as you always approach from the same direction. For example if you overshoot by say 1/4 turn then you would need to wind back a turn and then wind forward by 3/4 turn to get to the right position.

My only other issue with the vice is the paint quality which is a bit haphazard with some points missing underneath and a few splashes on the slideways. Luckily these were easily removed with a thumbnail.

The good points about the vice are a bar below the vice jaws to stop the jaws lifting when clamping an item at the top of the jaws similar to my milling example above. The thumbscrew locks work well and there are also adjustment screws on the gib strips to compensate for any wear. The cast iron construction is solid and there is a good weight to the vice. The exploded diagram (and contruction) should mean that it can be disassembled either for maintenance or enhancement. Due to the size restrictions I’m not sure if I’ll be able to use the vice as much as I’d like to but we’ll see how it goes in 2011. 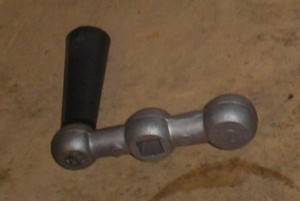 One final though is that the handles are very nice and I might just try casting one in aluminium for any other projects that need them. That would need a core to be made and so it’s an interesting little project to try.