I was watching an old episode of Wallace and Gromit World of invention and saw a piece about one of the people who is working on improving electric motors. Cedric Lynch inventor from Potters Bar has been working on his designs since the 1970s. There was a video of Cedric in his shed inventing and with his electric bike testing his latest motors and in the Isle of Man Electric TT coming 2nd and 4th place with bikes with his designs.

Back in the 1970s the Cedric got involved in building his own electric “Soapbox cart”, and got mentioned in New Scientist. His later designs made it onto Tomorrows World in 1989.

One of the key reasons for his success is the high efficiency of his motors.

Cedrics prototypes were made from flattened soup cans and it is the inclusion of this lamination that allows the use of grain orientated materials that have better magnetic properties in one direction vs the other. These materials which are ususally used in transformers have lower eddy currents and others core losses than the armature in a conventional motor.

The latest motors also have higher torque per amp and lower speed per volt which means for simplier transmissions. The motors are suitable for a variety of vehicle uses such as boats, bikes, vans and also stationary uses like hydraulic pumps, cranes and machine tools. The motor can be used for regenerative braking and even as a generator for welding.

Cedric is currently working with Agni Motors in Gandhidham in India. Their address is described as “Shed No. 37/38” which I’m sure will make Cedric feel right at home.

Electric cars have also been in the news recently with the BBC’s attempt to get from London to Edinburgh using only public charging points.

If you are in the USA then Electric Motor Depot sell the Agni PM Motors. 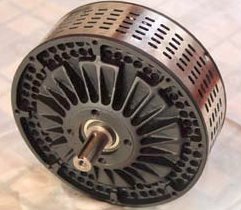