When I was younger I would borrow books from the Library such as Usborne series and the Know How Book of Batteries and Magnets and then create things in my bedroom based on my notes taken from the books.

Back in the summer, Paul Bird sent me a couple of old books “The boys book of model making” and “Science Model Making”. In the latter was the following picture of a quite sophisticated electric motor you could build. The Know How ones were more drawing pins, paperclips and corks wrapped with copper wire if I remember correctly. 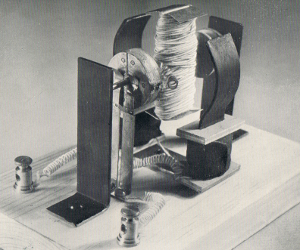 Electric motors have come on quite a bit since then and as well as the Lynch Motor here are three other interesting designs that I recently read up about.

Outrunner
I came across outrunner motors when looking at some pages on model aeroplanes. The idea is that the windings stay still and the case rotates around that. These run slower than conventional motors and produce good torque making them good for aeroplane engines.

Pancake
Pancake motors are as the name might imply are significantly flatter in one dimension than a conventional motor. This arrangement is made possible by either widing the coils in the shape of a flower petal or in some cases printing these onto PCBs. Pancake motors often get used in computer disk drives or fans where space is at a premium.

Piezo motor
These are the most different from the other motors in that they don’t use magnetic forces. The piezo motor uses the movement of piezo crystals to push the actuator in very small steps. These can be wrapped in a circle to walk the rotor around. They are used for very accurate linear or rotary positioning.

The other key innovation in motors is brushless DC motors. Rather than having carbon brushes running on a commutator the current to the coils is controlled electronically. This means that there are less mechanical components to wear out. The electronics

One thought on “3 interesting electric motors”