Victor Coleiro from Melbourne Australia has made some interesting projects which he’s shared on Youtube and Flickr.

Workshopshed: Victor, thank you for agreeing to be interviewed, how about we start with where you make your projects?

Victor Coleiro: I make all my projects at my home, actually in the living room to my wife’s dismay. 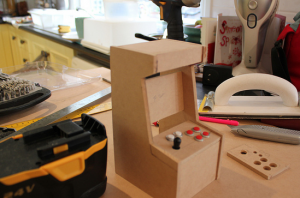 Workshopshed: What kind of tools do you use?

For the 1/12 scale model house I mainly used a balsa wood cutting kit including a miniature mitre saw and balsa cutting knifes. About $800 of balsa wood went into the house and it took about a 1 1/2 years working on it on and off. Workshopshed: Where do you get your parts from for the arcade machines?

Victor Coleiro:Most of the parts I use are sourced of ebay, local electronics shops and online electronic shops.  Hardware tools and materials are mainly sourced from a large Hardware Warehouse chain in Australia called Bunnings; kind of like a Costco but with just Hardware, tools, materials etc.

Workshopshed: In particular where did you get the tiny coin slot for the Galaga?

Victor Coleiro: The coin slot on the Galaga machine is actually part of the plug and play game system that I butchered to make the Bartop arcade machine.  Its a Jakks Pacman plug and play tv game system.  I’m actually trying to model a coin door now to use for a micro cab using micro tactile switches.  Also planning to include an illuminated marquee on a micro cab. 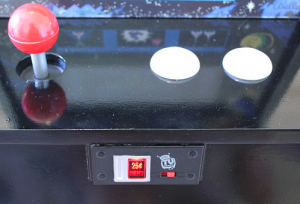 Workshopshed: Do you have a background in model making?

Victor Coleiro: I dont have any model making background. I only started making models really when I built the scale model house which I did to refresh what I had learnt after doing a House Wood framing course; which I did with a mind to using the skills for renovating my home.

Workshopshed: Do you have a background in electronics?

Victor Coleiro: I don’t have a background in electronics, although I did do an electronics class back in high school and have until recently been working as an IT Manager.

In regards to the arcade machine , I guess it was a bit of nostalgia, as I had grown up playing video games in the arcades after school almost everyday up until about the age of 14. Back then I was very into video games and even managed to win the Australian Colecovision video game championship when I was 14 which was televised, but thats a story in itself. Anyway, basically I decided to make Bartop arcade machines initially having been inspired by a few works I had seen on Youtube. I have made 3 of these, 2 Galaga machines and a Space Invaders.

Victor Coleiro: Either a Micro Racing arcade machine like a Outrun or Daytona with working steering wheel etc or another micro cab using a Caanoo and running mame, maybe a combo of both.

All images are copyright Victor Coleiro