Thanks to Martin Power and Robert from Kitagawa Europe, I have another guest blog. Robert looks at rotary tables and how the small manual rotary table you might have for your drill press or milling table compairs with it’s bigger brother in the industrial world. For the model engineer, the rotary table would be for cutting curved slots say for an expansion link or rounding the ends of con rods. In industry there is a much wider range of tasks for the rotary table.

Those of you that have converted your shed or garage into a workshop will probably already know what a rotary table is may even have installed one. Even if you haven’t got your own personal workshop; there is a good chance that you have at some time used or at least come into contact with a rotary table. This will most likely have occurred in the school environment when in a Design and Technology class – or similar subject. The rotary table is of course a clamping mechanism that is used in the shaping of metal parts or components, in conjunction with various machines, including lathes, drill presses and milling machines. In its most basic operation a rotary table is used to hold the object piece firmly in position whilst holes are made in an evenly spaced fashion. The image above shows such a task being carried out on a rotary table which has been mounted on a drill press. There are however much more advanced rotary tables available on the market, which are used in various manufacturing industries. 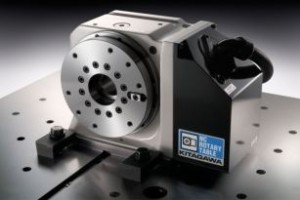 The photo above shows Kitagawa’s popular GT200 model, which is ideal for heavy machining. The complexity, accuracy and performance levels of such machines make their shed based cousins look like mere toys.

The top end rotary tables are commonly used in the manufacture of components that are used in cars, trains, planes and boats. Every time you travel somewhere in a vehicle you will be making use of metal work that has been created by a rotary table. It is of course important that every component of a vehicle is made precisely to ensure the safety of those using it. In order to deliver this precision, computer numerically controlled (CNC) rotary tables are used in the manufacturing world. Rather than positioning and turning the rotary table manually; a CNC driven model operates using pre-programmed commands which are entered into a control module such as the one above. The rotary table is also able to communicate with the other end of the metalworking machine that holds the shaping tools. As a result both are able to work in unison; bringing precision and safety.

Whilst rotary tables play a key role in the manufacture of parts in the transport industry, it by no means the extent of their reach. Their usefulness stretches to many other areas of business, from construction to pipe laying. In order to fulfil their role in so many different environments it is important that rotary tables are both adaptable and available in various sizes and configurations. 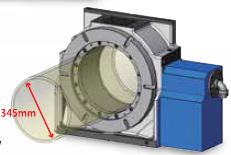 In the example above we see a rotary table that has a huge through-hole capacity of 345mm. This allows long bar and tube shaped workpieces to be clamped effectively and is ideal for producing pipes to be used to move gas, water and oil. For such tasks, the standard three and four jawed chucks, such as the one below, are not suitable.

Such a clamping solution cannot deliver a suitable torque to hold the piece in place whilst it is being shaped. The result will be that shaping tools will deflect from their target, thus compromising the quality of the final component. Instead a collet chucks as shown below is more suitable for use when manufacturing pipes and bars.

The circular shape of the collet chuck allows pressure to be applied evenly to the outer surface of the workpiece. This allows larger gripping torque to be applied and also reduces the likelihood of surface damage to the workpiece that could otherwise be caused by standard jawed chucks. The clamping pressure is applied by tightening accompanying sleeve over the outside of the collet chuck.

The final main difference between manufacturing rotary tables and those used in schools and hobby workshops centres on the ability to choose tilting options. Standard rotary tables allow for the workpiece to be positioned along 3 axis in relation to the shaping tool. In contrast many models used in manufacturing include a manual or CNC tilting device that enables the workpiece to be positioned on a 4th and 5th axis. The image below shows a rotary table with tilting capabilities being use alongside a drill press. 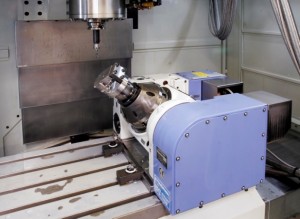 As you can see, the machining tool is now able to approach the workpiece from different angles than would otherwise be possible. This allows for more much complex items to be produced, such as flute shaped ones.

Many thanks to Robert at Kitagawa Europe.