At this time of year I normally have the same though, “not much got done this year”, this is then followed by a quick check of the blog archives and a happy moment of surprise when I see that actually quite a few things happened. 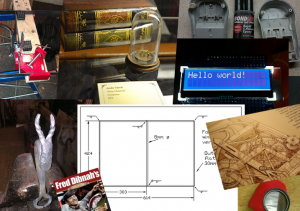 I had a good start to the year as my “Flea Chariot” was accepted for an exhibition in Manchester. I had good fun boxing it up and it was exhibited at the Curious Pursuits exhibition during February.

In March, I was contacted by Farnell to have a look at some of their products and I started my little venture into electronics where I used an Arduino and a mouse to create a digital rotary table. There’s still a little to be done on that project but all the electronics are pretty much completed. I may add a few buttons for zeroing etc. That has inspired me to purchase some more microcontrollers for temperature and humidity measuring in the Workshopshed.

In the summer I had the luck to visit Jo the Iron and spent the day learning to be a blacksmith and made a few useful things including a saw and bottle opener which I still get a smile from using.

I have been thinking about purchasing an anvil so sometime and it was probably the trip to see Jo that sprung me into action. I bought a little anvil made from an old piece of railway track that’s just the right size for my workshop. It did require a bit of rust removal but it cleaned up nicely. 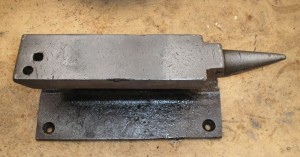 The other new thing I got into this year was Sugru it’s sticky rubber material that can be formed into shapes for hacking or repairing items. I used it to improve a sandpit, make a camera lens hold and to making security screwdriver.

I had some time for welding this year. After using CAD to draw up a design, I welded up a couple of security grills for a mate’s shed. Welding was also a popular choice with people searching for the site.

There were slightly fewer visitors than 2011, might be due to Google changes as the drop off was during April when their changes were rollout out, google is still the main driver for traffic to the site. This year saw slightly more mobile users but still only 6% of the views and an increase in non english speaking visitors

One of the most popular pages was my April 1st Joke post about Leonardo Da Vinci’s IPad and the Metall Modell Bau review was also popular.

I also found that my guest’s posts were popular, both a look at rotary tables and selecting CAD software were popular. I have been warned off guest posts but if they are of that high standard then I’ll be happy to receive them. I also took a guest spot on Westerman welding’s blog with a comprehensive look at duty cycle.

I hope you enjoyed 2012 and hope to have more metalworking and welding projects in the new year with maybe a little electronics thrown into the mix. Let me know what you think either via the comments below or twitter.