So wiring up the LCD and getting it to display some text should have been simple, I had all the bits, the wiring was very straight forward and the libraries for programming were all written.

But the screen was just blank….

Firstly I checked the wiring was correct and no visible shorts. I then tried different libraries settling on the ST7036 as my panel was driven by an ST7032 which should be code compatible, however a change of library did not seem to help. So I thought it was time to dig out the multimeter and check that I did not have any dry joints or shorts. Unfortunately, I could not find it.

Whilst I was thinking of where I could have left it I made a couple of other changes to the circuit. On one website I saw a recommendation to keep the reset pin high so I wired that to the 5v line with another 4K7 resistor. I also wired in the backlight on the off chance that was powering more than just the light. The backlight came on but still nothing from the display.

I’ve since been advised by Midas that the display is a “a negative type LCD” so characters can’t be seen without the backlight being enabled. They also agreed that the reset should be held high. 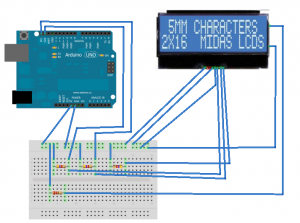 I searched high and low in the Workshopshed and found a rev counter but no multimeter, so I put that away in the “measuring tools” drawer. At the back of the drawer was the multimeter so dragged that out and checked my circuit again. After all that it turned out that there was nothing wrong with the circuits.

So back to the software….

I dug into the libraries and noticed that the code that initialise the LCD pretty much matched the example I was seeing on the datasheet, this was a good sign as it meant my library was a good match with the panel. However in the constructor of the ST7036 class there appeared to be a bit shift of the address, one bit to the right.

I’m guessing that’s there because the last bit is the read/write flag, so the library is stripping that off to provide it’s own value.

However in the case of my datasheet that had already been factored in. So I doubled up the address (to shift it one to the left) and uploaded my new code. 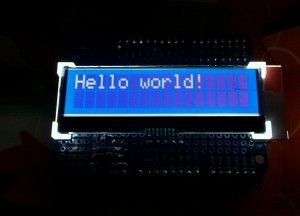 So the next thing to do is to wire up my sensor, hopefully that won’t cause me so much grief.

Of course if you don’t want to go through all this hassle you could always buy a ready made shield or kit, see The Shield List.