I’ve recently been given a rusty and heavy old toolbox full of bits. So in return I offered to fix up and restore the tools I thought would be useful for the origional owner and put them in a much lighter bag. I took ideas from the contents of the box and quizzed twitter and Jo Ellen from Toolbox TomGirl for content of the new bag.

One thing that was missing was a hammer, luckily, not so long back I found a hammer head in the garden but it was not in too good condition.

I started by scrubbing it a bit with some wire brushes to get the loose rust and mud off. I had some rust cleaner left over from cleaning up the anvil last year so put that and another old hammer head in soak. I then gave it a tickle with a wire brush attached to the angle ginder.

I also had an old handle from a previous batch of donated broken tools so carved the end of that to fit my restored head.

The last step was to secure it with a wedge which I made from an offcut of steel which I ground into a shallow wedge shape on the bench grinder. 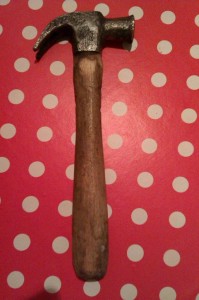