As previously mentioned I’ve recently aquired an old toolbox that has some items that look like they are worth recovering.

One thing that looked in good knick under the rust was 4 old files. There was also a paint scraper than had a nice blade and handle and mostly superficial rust on it.

I popped over to Robert Dyas for another bottle of the fantastic HG Rust Remover that used last year on the anvil. Whilst I was there there was a funny looking chap wearing a dressing gown. I laughed and though “that’s London for you” but later discovered he was working for the shop and dressed up for comic relief. 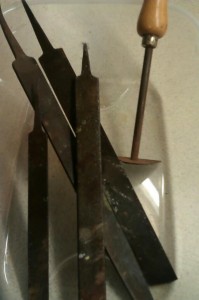 So that I could get the longer files into the plastic tub, I decided to bend the tangs, I got to agressive on one and managed to snap it off. I’ll have to see what I can do with that as the file was actually quite a nice one.

The rust cleaned off the scraper quite quickly but I left the files in to soak for about 2 hours. They also came up well and I can read the makers details on them.

The appear to be as follows:

The E.S.C one is particularly clear and appears to read “Vickers” and have a picture of a camel on it along with a K mirrored and the word “Cyclops”

I searched for that an found an interesting site full of forge marks based in Belgium which states that my file is from the “English Steel Company” with picture of what appears to be an almost identical file.

2 thoughts on “Restoring some old files”