The other week I had an idea regards bending stainless steel sheet to form a cone shape.

To help this process along I’ve made a former from some heavy steel bar. It was made from 8mm bar heated on the hearth with a propane torch and bent in the vice and on the anvil. I did try out my bending forks but they are really too far apart for this kind of work. I’ll drill another hole in that so that the pins can be moved closer together. 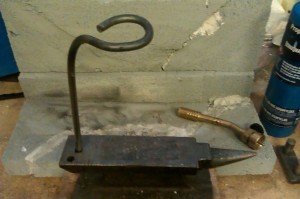 I also had a bit of a practice with some heavier gauge sheet which I turned into a key fob for my cousin who’s just got a new house. As usual I coloured along the edges with permanent marker and then used a scribe to mark the line to file to.

The holes were drilled with a centre drill so that they would have a slight countersink.

The corners were rounded off with the file and I used a small offcut of 8mm bar as a template to compare against.

I see a mention on the model engineering clearing house of “filing buttons” these are clamped against the item being filed and are sometimes (not always) hardened. I tried to use the bar in this way but could not get it to stay clamped in the vice. Hence I used it as a template instead. 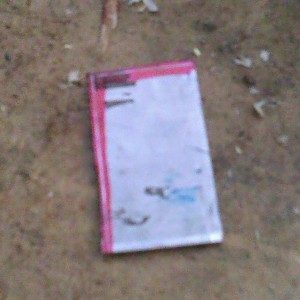 I followed some tips on stamping for the letters. As well as practicing on some scrap, I used a heavy hammer and pretty much let that fall onto the punch. This gives consistency to the letters so you don’t get some more punched than others. It worked but I do need more practice. I’ve also heard of people using a jig so that the letters are evenly spaced and in a straight line. I probably won’t bother building one of those unless I have a lot of letters to do on something. 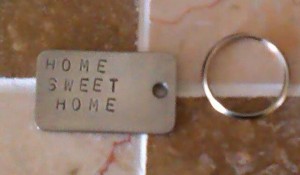