Obviously I did not want the BBQ to get all rusty again so I wanted to give it a good coat of protection.

The holes in the legs were filled with epoxy and the frame was primed with Finegan’s #1 primer. I managed to splash the wheels on the first coat so I bagged them up for the second coat. The shelf was also painted with the same primer. I did note that in the hot weather the primer thickened up quickly meaning that I needed to paint quickly and only put a little on the brush at once.

Any runs were sanded down with a fine grade oxide paper before applying the top coat. 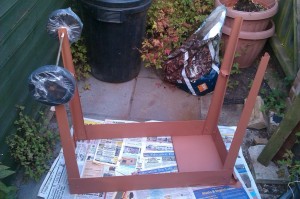 A grey metal paint was used for the top coat, this only came in a hammered finish. I found that this paint was quite thin so several coats were needed. The issue with these types of paints in cleaning the brushes. I’ve previously found out that the thinners are a mix of acetone and naptha so I’ve made up bruch cleaner before using a regular naptha based paint thinner and some nail varnish remover and it works well. 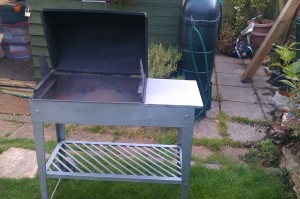 Spray on BBQ Paint was used for the barrel as it needs to be able to withstand higher temperatures, from domestic suppliers this only seems to come in matt black but that was fine for my use. It took a couple of applications to get a solid coat on the outside. 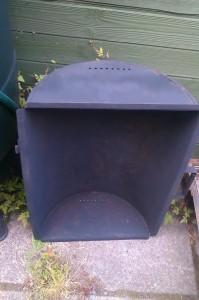 However I found the paint was rubbing off on the inside of the barrel so I swapped over to Rustins High Heat paint. This paint requires a hot cure in that it want to be heated to 200°C for 20 minutes after it’s been applied. The BBQ was a bit large to fit into the domestic oven so the obvious alternative was to pile it full of wood and light a fire. This had mixed results, some of the paint cured correctly forming a tough skin. However, where the paint was in direct contact with the flames it burnt and peeled off, luckily this is not in too many places and it should be possible to touch it up. We can either re-do the fire or just leave it to the first time we do a proper BBQ.

I decided against using any treatment on the wooden handle as I thought it was quite near to the hot bits and hence I did not want to have issues with smoldering paint.