The shelf for the BBQ had had standing water on it for many years and hence had rusted badly. I had hoped to be able to re-use some of the metal from this for an ashpan but quickly realised that there was nothing to salvage. The shelf is quite important as it provides strength to the legs and also lowers the centre of gravity. It’s likely it will be used to store spare charcoal when the BBQ is in operation.

My first idea for a replacement was a cross hatched grid of slats. 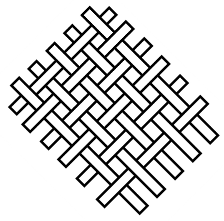 I tacked together a frame from angle iron and started lining up the slats. I quickly realised that this was going to be a lot of work. So I simplified the design to a single direction for the slats and moved the slats closer together to keep the strength. 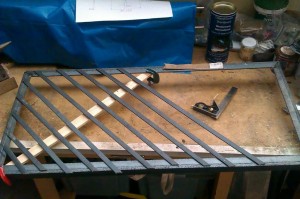 I used some wooden strips and spacer blocks to ensure that all my slats were perpendicular and evenly spaced. Because I did not have lots and lots of clamps, I used masking tape to hold them in place. 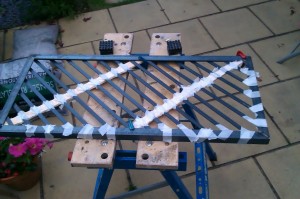 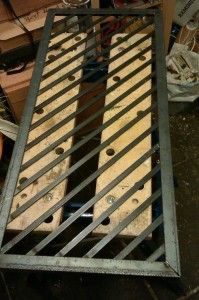 Finally I went back and fully welded the corners of the frame. 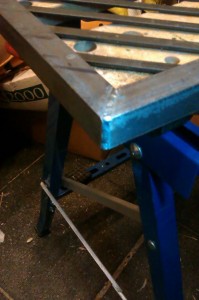 The shelf is fairly heavy but when it’s in place on the frame it holds together well and gives the whole thing a feeling of rigidity. Unlike the previous solid frame it should not suffer from standing water and given that it’s made from a heavier guage of metal it should not deteriate so rapidly. 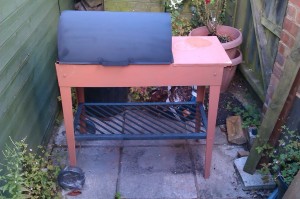