I ordered some 1.2mm stainless steel sheet for my bathroom refit and due to a mis-communication it came with predrilled holes. As I did not have time to order new, to fill them I decided to TIG weld them.

The setup was a 1mm tungsten, 45A, pulsed at approx. 3hz with some heavy steel plate as a backing, about 30mm in total, I just used the earth clamp to hold this against the back. Rather than grinding the tungsten, I just snipped the end with a pair of pliers, this seemed to work well and was a lot faster than grinding.

As this was an unexpected job for filler wire I used a reel of 0.8mm stainless wire I got from the local Halfords. I don’t recommend the reeled wire as it’s a bit springy and you really need to bend it straight before use.

I just worked my way around the hole adding a small amount of filler rod. Once the hole was filled I turned the sheet over and just used to torch to work the exiting metal to get a flatter result. 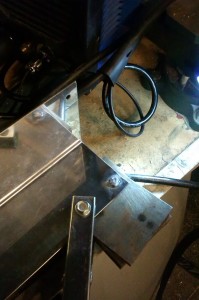 I also had trouble with my mask, it was either too dark or too bright. It was a bit of a rushed job so I did not have chance to experiment. Chad Mustard from Condor Industries suggested “turn the sensitivity down and shade 10 as a starter then just tweek a bit”

Finally, I ground the welds down using a flap disk. It made a nice pattern so I ground the rest of the sheet to match. 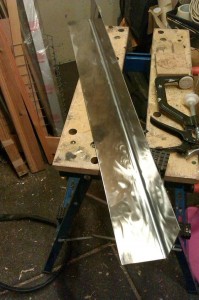 The sheet was simply glued in place with builders adhesive, it is supported by concrete backer boards and we used sealant for the edge where it meets the shower tray. 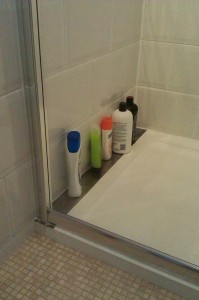 Obviously the next step is to put the shower tidy back on the wall.