Normally all my welding is TIG welding, however this weekend I ventured into a bit of stick welding. The reason for this selection was to repair a chair and to provide guidance for repairing some more similar chairs. My friend has a whole batch of chairs that have failed in a similar manner and we discussed how they could be fixed and strengthed using some 8mm round bar.

Before starting I straightened out the legs and used a small hammer (backed with a larger hammer) to bash the dints out.

In preparation for welding I chipped the powder coating of the chairs with a hammer. I then used a mini-drill with a small grinding drum to ensure that there was bare steel to weld to. The bars to be attached I ground on the bench grinder and also added a bevel on the ends. 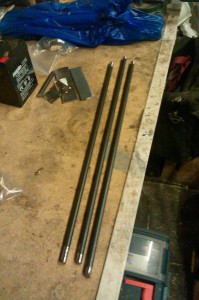 Before getting going, I did some experimental welds. These were pretty bad. I started at around 40A which is what I’d use for TIG for this size of metal. The first attempt my current was too low and all I ended up with was a row of blobs so I turned up the current. The second attempt was better but when I chipped off the slag I noticed I’d managed to completely miss the gap in the metal. 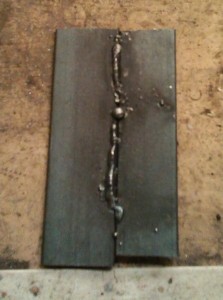 Looking on the tips pages on the Mig Welding forum it would suggest that I was still too low on the amps for this second run.

I also wanted to practice a thick to thin weld as those would be needed for the leg ends. So I used a 1mm sheet with a 8mm round rod. This also went badly as I managed to melt my magnetic clamp and after it had cooled I managed to easily snap the weld in two. The following day I did saw this in two and there is good evidence to suggest that the plates had fused below the surface. Unperturbed, I settled on 66A and clamped up the first bar for welding. The arc struck nicely on the bars and globs of molten metal were quickly being laid down. Stick is similar to MIG in that the heating and depositing are intimately tied together. There is a lot more control with TIG as you can control these separately. For welding these bars I found quick bursts on opposite sides worked well. However, be aware that you can’t easily go back over weld you’ve finished as it cools with a coating of slag on the surface and you can’t successfully weld through that.

My first weld seemed to have some penetration and held nicely so flipped the chair over to weld the foot. This was tricky, but I found that it was possible to aim the heat at the bar and sweep it down onto the sheet, in a similar manner to that I’ve done using TIG. However it was very easy to burn through the sheet which happened on a couple of the legs. I was a little concerned that the wood I was using for clamping would be an issue but that was just fine because of the small amount of heat generated by these small welds. My last weld was not particularly successful. I did revisit it and add a whole load more metal so even though it might not have penetrated very well it has at least encapsulated the other bar so the result should be fairly strong. 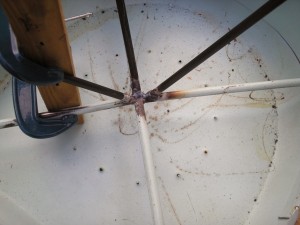 Looking back a the picture, I believe the reason for this was that the previous three welds had all thrown out dust and slag onto the forth bar. What I should have done was to have a file or grinder available to clean this up. Possibly some emery cloth or wire wool would have also worked as it was mostly dirt rather than the harder enamel like slag.

So here’s the finished results, you can see the problem with overheating on the legs where the powder coat has discoloured. When I “tested” one of the bars it came loose from the leg end. Given the difficulty in welding I decided to use epoxy to fix that and now it’s nice and strong. This would be my recommendation for the rest of the chairs as there is plenty of surface area to glue onto. Don’t forget that you need to ensure that the bars are clean from oil etc when gluing as well as welding.