Not so long ago we bought a box to put by the front door and put our shoes in, the old portis shoe rack now lives by the backdoor. The box came with a rather strange lid, a sheet of ply with missing corners that just sat on the top in some grooves. I’d never really liked the lid, it was easy for it to fall into the box and the edges were starting to splinter which was making it dangerous to use. So I decided to make a hinged one. 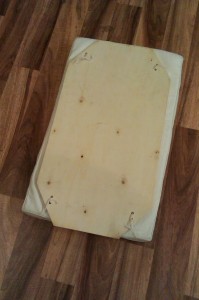 I had some 18mm ply left over from the shower room refit which was a good size for a lid so I purchased some pine strips for edging and four small hinges.

I wanted the lid to open with the box against the wall. So rather than fixing the hinges to the box I used a strip a suitable offcut to act as a support to attach the hinges to.

I cut the support to length and the ply to size. Some fixing holes were drilled and countersunk in the support.

I marked out then chiselled recesses for the hinges in the support and then matching ones in the ply lid. I then marked and cut the mitres with a tenon saw using sandpaper to get them a good fit. These were glued and pinned in place. Once each one was attached I planed it flush with the surface taking care not to take off the top layer from the ply. 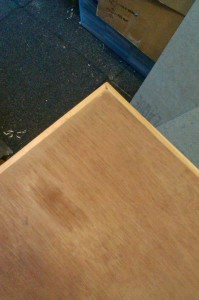 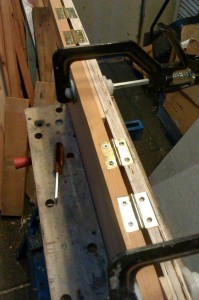 Finally the support was screwed onto the box with some long screws. We now have a easy to use lid for our box. 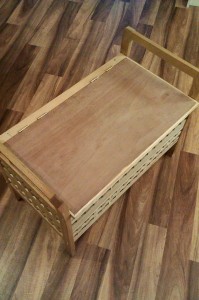