Frederick Vandenbosch is a winner of multiple design challenges and has built some very high-quality projects. He recently completed the Pi IoT Smarter Spaces Design Challenge using OpenHAB 2; creating a control unit, clock and smart key holder. His PiDesk made it on the 50 Greatest Raspberry Pi Projects and is featured in The Mag Pi Magazine Issue 50.

Workshopshed: Thanks for agreeing to be interviewed, I see you’ve got projects going back to 2014 on your website. How long have you been making?

Frederick Vandenbosch: You’re welcome, thank you for the opportunity!

I started fiddling with Arduino and Raspberry Pi in the summer of 2012, shortly after discovering the existence of both boards. But it wasn’t until December 2013, when my first element14 RoadTest application for the Pi NoIR camera was selected, that things became more serious and I started documenting my projects. The RoadTest was also a mini challenge, and winning gave me that motivational boost to continue exploring electronics and making in general. I discovered the world of making, something I didn’t know existed. Since then, I have attended various Maker Faires as a visitor which inspired me to create more projects, and last year, I finally took the step and attended as an exhibitor. 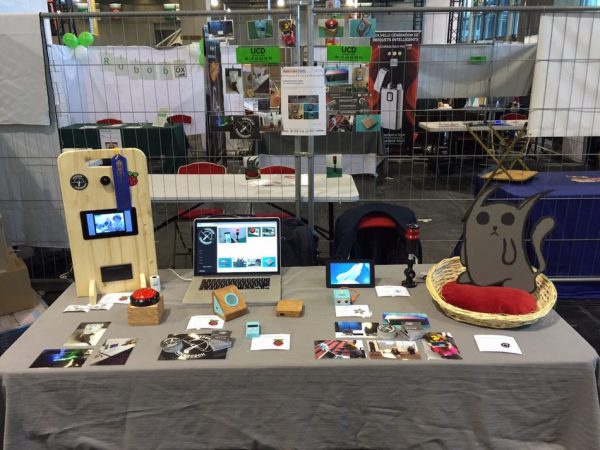 Workshopshed: Having entered a design challenge last year, I know how hard they can be. Some people drop out at the start or part way through. What drives you to enter and complete design challenges?

Frederick Vandenbosch: They are hard, but I think they are worth it, for various reasons.

A challenge is a great opportunity to explore new technologies in the form of hardware and software, both by yourself and from the other competitors. I always find it interesting to see how a problem can be solved in different ways, by different people, depending on their skills or abilities. The community is also there to provide feedback and help along the way, resulting in a great learning opportunity.

There is also the fact that every competitor is given a starter kit for free. Depending on the challenge, this can vary from a few parts to a whole box full of electronic goodies. This allows you to get started with your project without having to purchase the core components, and no matter the outcome of the challenge, this can be considered a prize on its own.

Finally, the actual prizes of course. Every challenge has amazing prizes, ranging from trips to events such as Maker Faire or Electronica, to tools and equipment such as oscilloscopes and 3D printers.

Workshopshed: Your projects are very well finished, do you have a background in product design or furniture making?

Frederick Vandenbosch: Not at all, I’m mainly a software guy. I started off as a software test engineer and gradually transitioned to software and hardware integration. That is the reason why at first, my projects were a bunch of boards and wires interconnecting them. It worked, and that was enough at the time. As I acquired more tools required to fix things in my home, I started experimenting with basic frames which could be made using a drill and a saw. Some times it would work and look good, other times it wouldn’t.

I now own more tools, including a CNC and a hand router, allowing me to make more intricate pieces to make enclosures from. The more I make things, the more I learn new techniques and materials, which in turn allows me to improve my projects’ appearance. There’s still plenty to be learned though, and now that I’m quite comfortable with wood, I wouldn’t mind exploring other materials, such as metal for example. Welding is one of the things I would like to learn in the not so distant future. 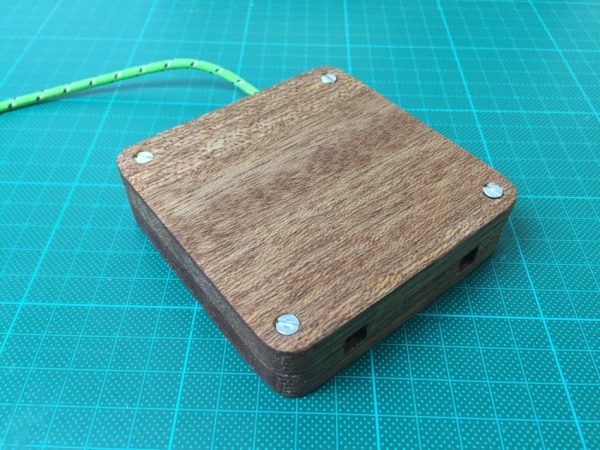 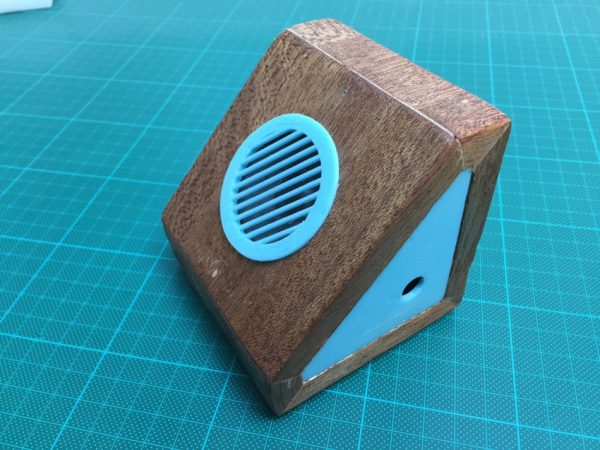 Workshopshed: Many of your projects use the Raspberry Pi, what is it about this board that makes it good for these projects?

Frederick Vandenbosch: The Raspberry Pi leans best towards my day job skills: Linux, scripting, integration … That’s why you may notice a big part of my projects is focused on the software side of things. On the hardware side, I typically take off the shelf components and combine them into a working solution. These are things I can easily do with the Raspberry Pi. The launch of the Pi Zero has also made it possible to make smaller and cheaper projects.

Then there is also the huge community with a wealth of information available. There haven’t been many problems for which I wasn’t able to find an answer for online.

Combining these different factors makes the Pi (Zero) one of my favourite boards to work with, though I do occasionally enjoy working with microcontroller boards such as the Trinket or wifi-enabled Photon.

Workshopshed: Where do you build your projects?

Frederick Vandenbosch: Until recently, I was working in the garage. It wasn’t ideal though, as my wife was also doing the laundry there and we couldn’t put the car inside during the winter either. In July we moved to a new house and I now have a lot more space: an office and a shed just for me. The office is used as an electronics lab where I do my soldering, prototyping and testing. The shed is reserved for the tools and machinery, where I do the messier and noisy work.

I’m still in the process of adding electricity and insulation to the shed, but I do hope to finish it before the winter starts. Once finished, every tool and machine will have its own place, which will be a lot easier than only being able to use one tool at the time due to lack of space. It’ll be awesome!

Workshopshed: In your latest challenge you won some tools and a 3D Printer, how will this affect what you can make?

Frederick Vandenbosch: The 3D printer is a welcome upgrade to my current one, which is small and made of wood. It worked great as a first printer a couple of years ago, but is now more malfunctioning than it is functioning. The CEL Robox has a closed build chamber, and from what I’ve seen you and others make with it, it seems quite reliable and easy to use.

The tools are also a welcome addition. I haven’t received them yet, but it seemed to contain a wide variety of tools which I’m certain will come in handy in the future.

This prize will help me take my builds to the next level, creating even better projects in the future.

Workshopshed: Do you see yourself as an Engineer, Maker or something else?

Frederick Vandenbosch: That’s a tough one. Perhaps a bit of both, depending on the activity and the interpretation of both terms. For my day job, things are more serious and formal, which I would categorise as Engineering. In my spare time, I work on projects for the fun of building something and experimenting, which (for me) falls in the Making category.

Perhaps the term “Jack of all trades” could be used as well, as I like to explore and be able to apply a lot of different topics. That’s also the reason why I originally started off as a test engineer, which allowed me to come in contact with various different fields, ranging from satellite communication to IP networking, VoIP or even video coding. I’m not a master in any of these fields, but I know enough to be able to proceed with the tasks at hand. The same applies to my projects. I combine different topics such as electronics, software and woodworking for example, while still wanting to learn about and experiment with new materials or techniques.

Workshopshed: Thanks again Frederick, if you want to see more of Frederick’s work then visit frederickvandenbosch.be or Element14