A discussion on Element14 about Haloween costumes involving tech reminded me of a prop I built many years ago. It was made for a spoof Terminator film for the Student Television of Imperial College. The director Ronjoy Choudhury wanted a red eye like the partly damaged terminator has in the first film. At the time I’d found some fake eyeballs in a joke shop and added an LED. The discussion prompted me to remake this using a 3D printed eye.

The prop consists of 3 components. Firstly the 3D printed shell of an eyeball, it should print on most printers, I found there was a little stringing on the underside that needed cleaning up. You can use this as it comes off the printer or you could paint the little tube with a metallic paint and add some blood around the sides for extra effect. Secondly a flashing 10mm RED LED. It needs to be red as this uses a lower voltage than other colours such as white, and also the robot in the film has a red eye. Finally a coin cell battery, I used a CR2032 but if you can get a CR2012 then these are even thinner. One of the contacts for the battery is the outer case and back, the other is the middle of the flip side. Test the LED to see which way around it needs to be connected. The leg that connects to the middle (negative contact) can be wrapped into a spring shape, the other leg can be sleeved with some tape or heatshrink then wrapped around the side of the battery. 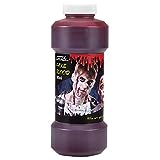 The LED and battery can then be placed into the eye model and held in place with some gaffer tape (which also protects you from the leg sticking into you).

Before use, check there’s nothing sharp that can stick into you and close your eye. The flashing eye simply sits over your closed eye and can be held in place with your cheek and eyebrow muscle. If you want it to look really effective then some face putty, spirit gum and makeup can be added. You could even add some metallic wounds using tinfoil and stage blood.

Here’s the finished effect being tested out.

I’ve provided the 3D eyeball model in OpenSCAD format and as an STL over on github.