Will robots take over our jobs?

There’s been a commentary running throughout 2016, and I don’t mean Brexit or Celebrity deaths. The message is that the robots are coming to take our jobs.

It’s been mentioned by the BBC, Guardian, Telegraph, Washington Post and CNBC even interviewed Elton Musk on the topic. So is this just the media being alarmist or is there something to it?

By robots most of these commentaries are referring to general automation, software and AI as well as what most of us might think of as robots.

A recent example you might have seen in your high street or retail park are electronic menus in McDonalds Restaurants, you can order your food and pay for it from a touch screen using a payment card.

I was thinking about self service checkout and wondered if that was technology taking a job or if that was more about moving that job to the customer. However, Amazon are planning a store that has no check outs at all so that would eliminate the cashier responsibility completely.

As a frequent traveller I also take advantage of online check-in, electronic passport control and have even checked hold luggage with an entirely electronic system at Copenhagen. Again, part automation and part delegating the job to the end user.

E-Commerce is one area where the change in technology has create new jobs. With everything from groceries to mobile phones being delivered to the door the number of little vans in our streets is increasing. To stock these vans there needs to be a network of warehouses connected with bigger vans and trucks. Even with warehouse automation this still requires lots of people.

The automation of commerce has also allowed second hand goods to be more easily traded with sites like eBay, GumTree and Amazon all providing services. Also crafts are more readily accessible with Etsy, Folksy or self hosted sites allowing use to buy from independent small artists. This is taken to the limit with 3D printing companies where designers don’t even need to manufacture the items with companies like Shapeways automatically printing the items. When I was watching the Shapeways mannequin challenge, it was interesting to note how many people they had running their machines.

Most of the references seem to point to two key voices, Moshe Y. Vardi and Michael Jones.

Moshe Y. Vardi Professor of Computer Science, Rice University points out in his article on “Are robots taking our jobs?” that there are two schools of thought here. First, the idea that technology typically creates new jobs to replace those it has taken, this is what we have seen historically as technology has taken over areas such as agriculture or manufacturing. Professor Vardi is with a second group who believe we have reached a critical point where smart machines and AI mean that technology is eliminating jobs faster than it is creating them.

Michael Jones Assistant Professor, Educator in Economics, University of Cincinnati thinks that there are more complex factors in play when looking at employment statistics. For him it’s more that people are not prepared to move locations to follow the opportunities. I suspect this comes from people being used to the job for life situation of old and not being able to adapt to a career change. As jobs become more fluid with people running multiple smaller and flexible jobs at the same time this will become the norm and people will catch up. 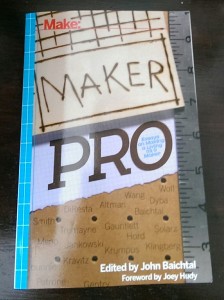 In the world of making, CNC tools and pick and place machines commonly make our goods for us. However, in Maker Pro – Andrew “Bunnie” Huang discusses supply chains and how automation only happens for the really big scale productions. For him it is the person to person interaction that is critical for small product runs of 10000 or less.

When I was working for Dowty back in the 1990s I had to send quotes out for 5 high specification washers to be provided as part of a repair kit. The big suppliers were not interested as the time it would have taken to setup the CNC machines would not have been economical. So the job was sent to a chap who had a shed and a manual lathe. I left a message with his wife as he was down the field, feeding his donkey.

The experts seem to be split on this but I side with Michael Jones and think the current state is just another cycle of history. However, something is certain which is that the world of work is continually changing and people will have to adapt. Technology is automating jobs but it also creating opportunities for those who want them.

Perhaps cheerleaders and brick layers are out of a job though? What do you think?

Yes, robots will steal our jobs, but don’t worry, we’ll get new ones – TheConversation – Michael Jones

Robots will take over most jobs within 30 years, experts warn – Telegraph

Will a robot take your job? (online tool to check your job) – BBC

Robots will eliminate 6% of all US jobs by 2021, report says – Guardian

Elon Musk: Robots will take your jobs, government will have to pay your wage – CNBC

Yes, the robots will steal our jobs. And that’s fine. – Washington Post

One thought on “Will robots take over our jobs?”