Earlier in the year I managed to destroy the head of the Cel Robox. After saving up for a replacement I though I’d have a look inside the old one to see how bad things were and to get an understanding of why it cost so much. From the outside you can’t see what the problem is but once I got inside I could see all the mechanics covered in solidified plastic. The single material head has 2 different sized nozzles with needle valves this allows the nozzle to be closed and reduce stringing. See Robox site for more details. 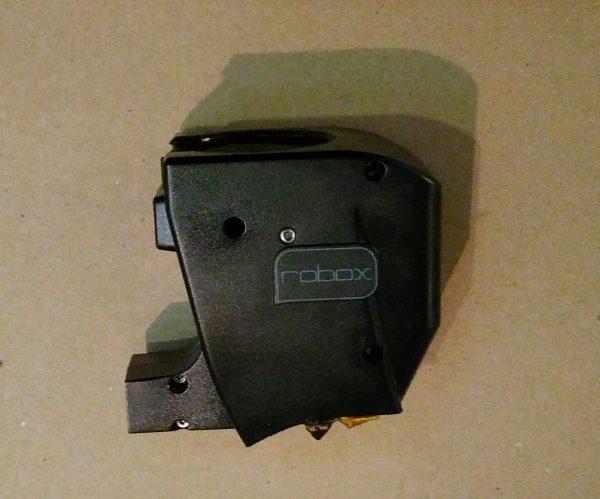 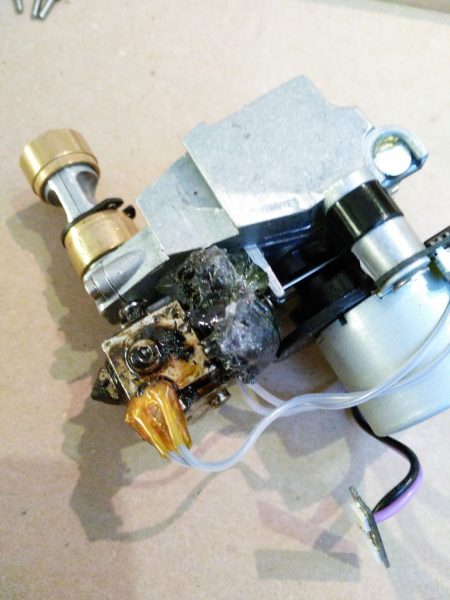 My first problem was getting into the case. I tried removing the screws with a standard 1.5mm allen key but that just slipped and rounded the corners. I tried couple of different ones but to no avail. So I invested a couple of quid in a nice once, a Wera Kraftform. 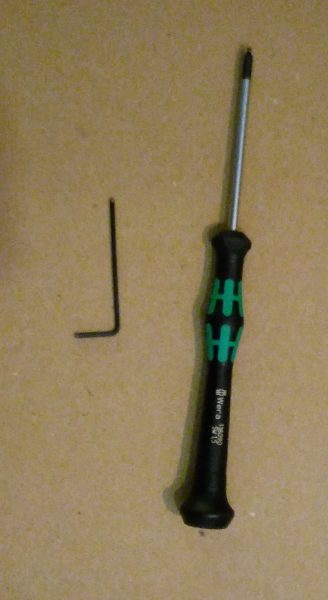 There is a small clip to remove that frees the fan then you can slide that out and unclip the cable. The case comes off once you remove all the screws. 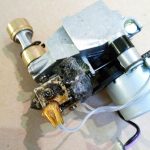 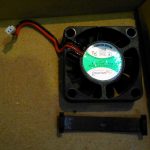 As you can see there is a large quantity of plastic around the mechanics. It’s hard to say if that’s come out of the head or as I previously thought was wrapped around the head due to a problem print. I did remove a lot of other plastic and despite it’s black colour it was actually clear PET, the printer did successfully print in black ABS before ceasing up so I’d expect to see that if it was a leak. I used a blow torch to remove the rest of the plastic so I could continue disassembly. 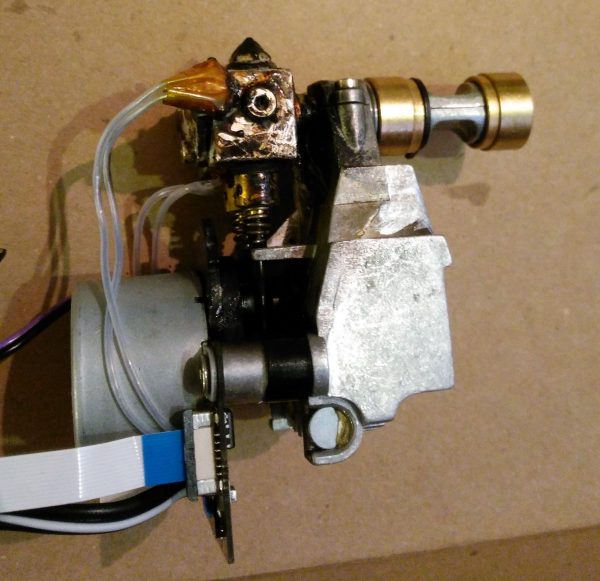 One of the reason’s this head costs over £100 is that it has a lot of electronics in it. There are 3 PCBs, the main PCB houses a stepper motor controller chip (Allegro) and an N Channel mosfet (International Rectifiers) for controlling the heater. There’s also a connector for the fan so there’s probably a transistor to drive that too. There is a switch on the bottom of the board which is activated by a cam on the stepper, this will allow it to determine which nozzle is selected. 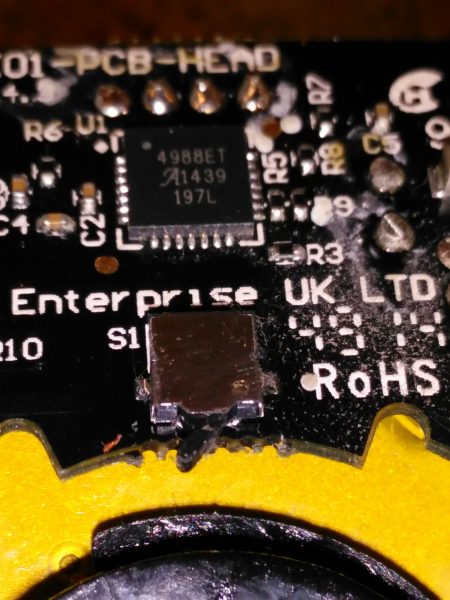 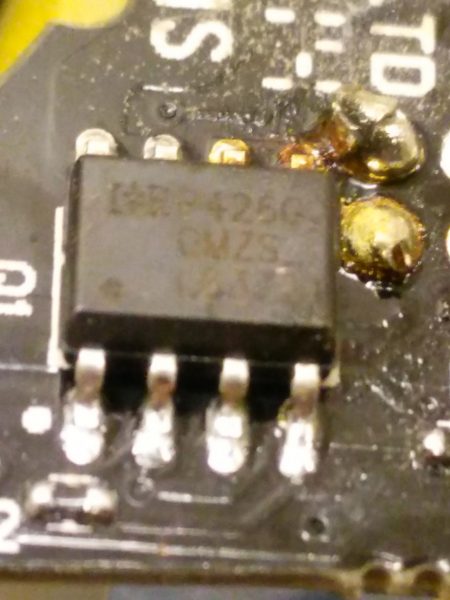 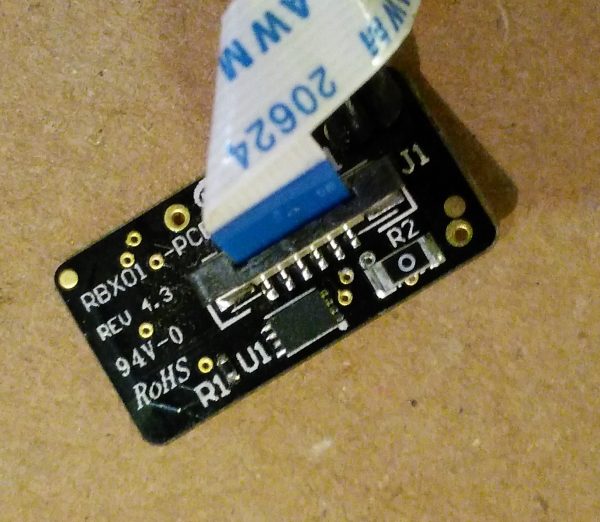 The connector PCB also houses an EEPROM that stores the head’s serial number, number of hours printing and maximum temperature reached. The final board has some LEDs to illuminate the work whist printing.

The mechanical parts are the stepper motor to select the nozzle, the needle valves, the filament guide and heatsink casting, and the nozzles. The filament guide bushes are easy to remove but you will need some circlip pliers. There’s also a big heater element right next to the nozzles, I believe the 2 wires going into the same block are for a temperature sensor. There’s a screw holding that in place which refused to budge and eventually sheered off. It required some pushing and heat to get it free. 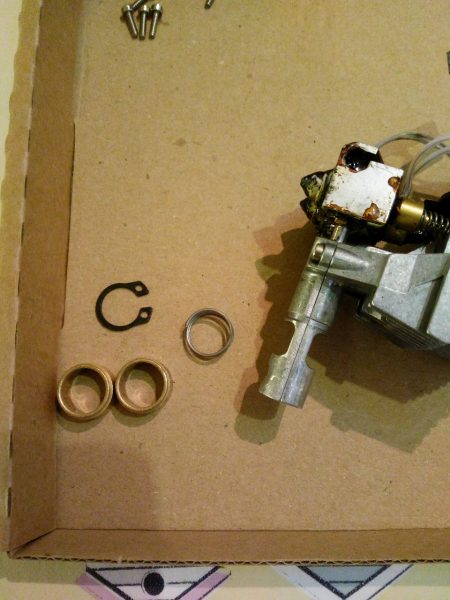 The head is well engineered although there have been some improvements for the V2 head. I’ve been told by Vlastimil Hovan‏ @Vlastimil_Hovan you can expect about 500 to 700 hours out of these heads. I’ll try to keep better track of that for the next one. The price is also comparable to a MakerBot or Ultimaker “Print core” so you are getting a lot more for your money. The dual extruder heads are about 50% more though.
There is a lot going on in the head and at first appearance it would appear that you could repair a lot of it. However, CEL don’t sell specific parts for spares and have advised that after re-assembly (which I won’t be trying) you need to calibrate the valves. Also it’s quite easy to damage components when disassembling, I broke the temperature sensor wires, 2 screws and bent the needles. So all in all there’s not much you can self-repair. However, I would recommend getting a 1.5mm driver to take the case off as then you can get to the mechanics cleaning before you get a problematic build up of plastic.