HackSpace magazine is in it’s third edition now and I’m happy to say that I’ve another article in this one. All of the editions can be purchased or downloaded from their site. 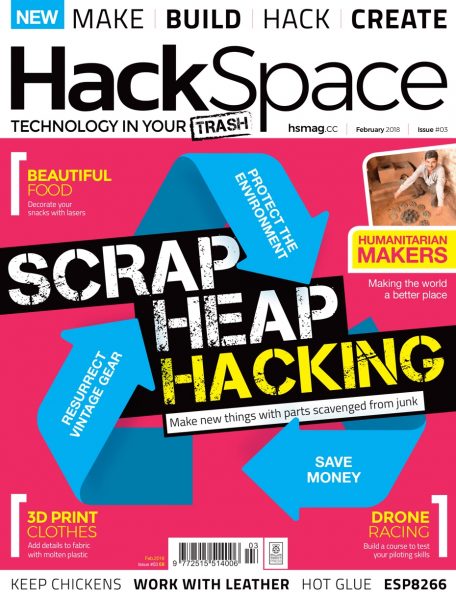 In the first edition of HackSpace magazine I designed a wood and electronic project using thin plywood and lots of LEDs. I added a driver chip to power control the power to the LEDs and a HC-05 module to allow the end user to control the speed and sequence using a bluetooth enabled phone. Combining woodwork, electronics and coding made for a challenging project so I decided that the next project should be done without coding. I’d been thinking about music boxes since the Gnomes workshop back in 2016 and had a small hand wound music box that played a tune from a Ghibli film. I added a dual 555 timer and modified servo motor along with a touch sensor. The box was a simple butt joined box with some plywood inserts to provide something for the lid to clip onto. I went even simpler for the third project. A steel box was made to stop mice from chewing my grinder cable. As mentioned a few weeks back this was designed using the Sheet Metal module in Fusion360. Apart from that the technology was very simple; wooden blocks, clamps and a hammer were used to fold the box. Silver soldering was used to join the corners and pop rivets to hold the handles on. The whole thing was spray pained using green pain then I added some stencil letters to give it an effect of looking like an ammo box. You can find the code, and files for all of these projects at https://github.com/Workshopshed/HackSpace

What are your thoughts?

The articles are written well in advance so the last one was completed last year. I’ve had a busy December/January so I did not submit anything for the next edition. However, I do intend to send in some proposals so hopefully we’ll see something more from Workshopshed later in the year.

What kind of article do you want to see more of? Pure woodwork or metal work? Electronics and hardware? A bit of everything in one project?

One thought on “HackSpace Magazine Projects”