“Aardman Animations has been commissioned by the BBC to produce a brand new live action show featuring Wallace & Gromit.

Wallace & Gromit present: A World of Invention, will take a light-hearted and humorous look at real-life contraptions, gadgets and inventions and aims to inspire a whole new generation of innovative minds by showing them real, but mind-boggling, machines and inventions from around the world that have influenced Wallace’s ‘illustrious’ inventing career. 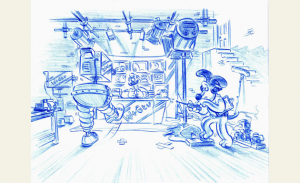 The show will be broadcast from Wallace’s basement, where he has created what he considers to be a ‘state of the art’ TV studio. Each episode will have its own ‘theme’, including Flying, Communication, Water and Space, and will made up of live action segments about real life inventors and inventions, with animated Gromit working on World of Invention links by Wallace and Gromit themselves.

The series is expected to broadcast in late 2010″

For more information visit the Wallace and Gromit website