Whilst reading the IET magazine, I spotted an article on Hybrid-laser welding. It was an interesting article but it also had picture of a man welding an marvelous mechanical elephant. I emailed the editor and he replied that it was a picture from the archive with the caption

After further enquires, I was sent a copy of the Stuart Mechanimal brochure and some newspaper clippings by Thaxted‘s mechanical elephant expert, Bruce Munro.

Frank Stuart was described by his wife as a genius and was a maker of stage scenery and masks. Frank’s motivation to build the elephant was because of the costs of feeding and keeping real elephants. 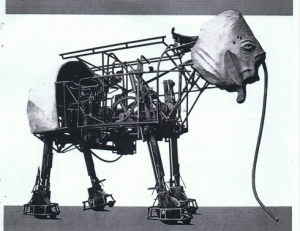 The elephant was powered by a petrol engine, it would appear that over the years various engines have been used (or replaced) with including the J.A.P. 4 cycle petrol engine and a water cooled Ford engine as mentioned in the catalogue. This was coupled to a 4 speed gearbox, the reverse gear was pneumatic allowing the elephant to walk backwards. The exhaust was run through a pipe and out the trunk. Top speed was apparently 27mph but the catalogue recommends a more stately 12mph.

The framework was welded steel tubing and the steel houdah on top had a safety bar.

The legs of the elephant were large pneumatic rams with a novel self leveling system which ensured that the legs did not leave the ground whilst it was walking. However the elephant was not designed for offroad with the catalogue strongly advising not to drive up and down the curb or onto soft ground.


Video of the elephant in motion

At least 10 of the elephants were built and there are reports of them ending up all over the world. Sadly due to poor financial management the elephant building business was not a success and went broke later in the 1950s.

The Southeast Missourian Jan 13, 1950 – A robot elephant has been built

Another video of the mechanical elephant, this time driven by Anne Weber

Mr Fuzzy from the MIG Welding forum found a link to the Christies sale for one of these elephants.

Another Elephant pic, this one in Sunderland

Peter Sellers was also a big fan of the mechanical elephants.

10 thoughts on “Welding the Elephant”