It had taken me a day’s work on my own to strip off the old window. Alan and myself then had installed one side of the roof in just a day. That left me 2 days to get the roof finished by myself. The other side of the roof was simpler in that it was two smaller rectangular sections. 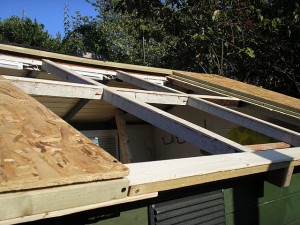 Before I got going with these panels, I measured everything up and to my horror discovered that the polycarbonate sheet was the wrong size. The problem with this sheet is that it has an orientation. The slots need to run down so that if any condensation forms then it will run out the bottom. Some how I’d managed to swap the dimensions before ordering. Luckly there was only 15cm to make up so I cut my cladding longer so sides of the plastic could rest on it. I formed up some more supports by extending the rafters and screwing in a cross piece to support the bottom of the plastic. Once the wood was in place I added the two layers of feld in the same manner as the others. 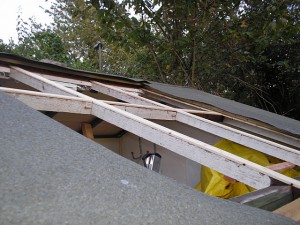 I used a hacksaw to cut the sheet. You have to take it slow cutting polycarbonate, the plastic rubs against the saw blade heating it up and it can stick and bend as shown below. 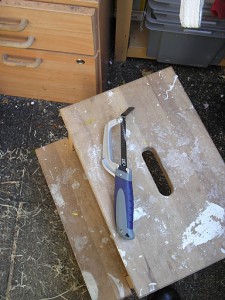 Once the window was in place it was secured using a couple of button fixings. These allow the poly-carbonate to move as the temperature changes. For a piece this size it could grow upto 5mm between winter and summer. Around the sides I screwed wood battens over the sheet and then used sealant around the edges. The felt was also sealed with roof and gutter sealant and nailed into the wood. Exposed wood was painted with a wax based wood preservative.

It’s rained quite a few times since the roof was put in place and so far it’s stayed dry in side. Once the door is closed the inside of the shed rose to a couple of degrees above the outside temperature with just my body heat so I’m optomistic I’ll have a warmer winter and won’t need the fan heater so often.

The end results are a roof with significantly better thermal characteristic than before with lots of light to the bench. As you can tell from my pictures, I’ve got a bit of tidying up still to do and the wood inside needs painting. 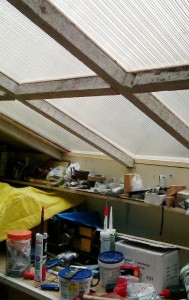 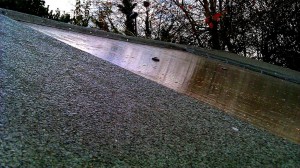 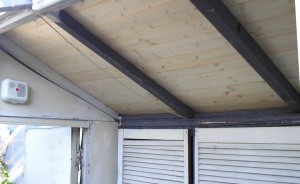 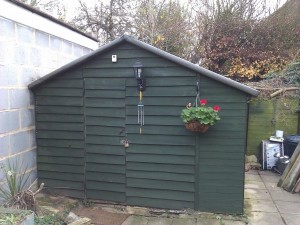 At the end of the project I ended up with an excess of materials. This was because to get the sizes I needed I had to order the larger sizes and cut peices out of them. So I had some roof felt, OSB and a load of mashed up PVC. The latter I took down the local recycling centre and the others I gave to people on freegle, basically they are too large for me to be keeping in the shed so it’s better for them to be put to use. I also had some insulation left over which was cut up and glued to my loft hatch to provide some insulation over the winter. The offcut of poly-carbonate has also gone to provide a slot window for another shed.