I’d planned to attach the legs to the top frame before putting on the top as it would give me more visibility but I found there were too many pieces to juggle at once. So instead I cut two more planks for the top and nailed them in place first. This allowed me to turn the table upside down and simply rest the legs in place to get them clamped. As before I drilled a through hole and screwed them in place. 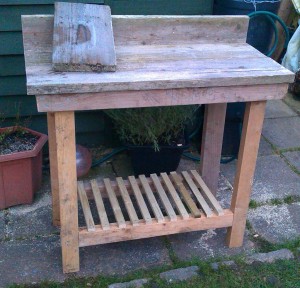 The bottom shelf was straight forward, I cut pieces of the wood I had available and screwed them to the cross members.

The next thing to do is to clean off all the old paint, dirt and pencil markings and apply some protection from the elements. I’ve tested some teak oil on a scrap piece, that seems to give a nice results although you can’t see it too well in the photo as it’s covered in frost.

Next: Finishing it off

One thought on “Potting Bench – Part 4”