I noticed at the weekend when I was welding that the pressure on my 10L argon canister was less than I remembered it being. I wondered if it might be time to visit Weld Air Supplies in Dunstable to get it topped up.

This lead me to thinking how I could estimate how much gas was left.

One idea from Rob Ives was to weigh the canister and compare that to that of the empty container. As Argon is heavier than air this should work well as long as I can get an accurate value for the bottle and fittings etc. I should be able to do that when I get to the end of my current bottle.

Chad, Jeff and Tom all advised to look at the pressure again as that should give an indication. My canister has a marking for filled pressure of 137bar at 15°C. My dials have lb/inch2 so some conversion will be needed, I’ll see what it reads next time I’m welding.

The MIG Welding forum suggested you could get an estimate based on flow rate and minutes of use and have a chart of the quantity in each type of bottle. Obviously this would work better if you started from a known place like a filled bottle.

This lead to an idea for some kind of flow meter / timer combination. I was thinking that a small fan could be used as the sensor. If I could find one with a built-in hall sensor for measuring speed, combined with a simple microcontroller for timing and display for readout. The issues would be calibration (which could be done against my existing flow meter), making sure it was air tight and quality timing which could be done with a cheap real time clock module.
An alternative might be to use the contacts of the welding torch switch to start and stop the timer, however that would need to factor in the post flow which as I start and stop a lot could quickly add up.
The addition of a set of external contacts for connecting a solenoid valve for a purge system to might also be a good feature.
I won’t be building one of these for some time as I’ve already quite a few projects on the go but thought it would be good to write up my idea whilst it was still fresh in my mind.

I drew up this system diagram 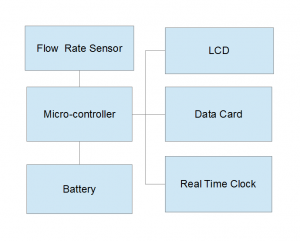 Having checked with my gas supplier, they suggest that below a certain level the pressure meter stops reading accurately so can’t really be used to check levels. I think in the short term I should weigh the current bottle when it’s empty and then weigh in the new one when it’s taken in for refill. I can then periodically weigh to see what has been used, once other projects are done I’ll look into building a gas monitor.