BBQ Restoration – Part 5 Before and After

So the BBQ is finished, I’ve cleaned off the rust and discarded the parts that were beyond saving. Made repairs and new parts such as the handle, grill brackets and legs. Added a complete new shelf welded from angle iron and strip metal. Added insulating blocks and new ash pan was fashioned from a smaller BBQ. And finally the BBQ was painted.

After the paint had cured, all that was left was to clean out the wood ash, line it with the new blocks, drop in the ash pan and clean the grill.

It’s seems a long time ago since that day back in March that the rusty remains of this 15 years+ BBQ were picked up. But there’s still enough summer left to get some use out of it and we’ve already got a cover and plan to keep it in better contions than it was previously kept in. The new slatted shelf and drain holes should protect it from issues with standing water and the many coats of paint should protect it from the elements.

Hopefully, weather permitting it will get properly tested this weekend. 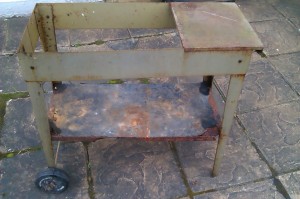 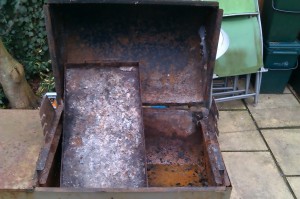 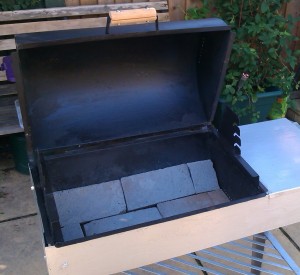 2 thoughts on “BBQ Restoration – Part 5 Before and After”