After the bathroom was repaired we have a selection of hardiebacker concrete board pieces left over. Not wanting to chuck these away but also not really having space for them I decided to make a planter out of them.

The board was cut using an old handsaw that I’d previously used for sawing up thermalite blocks to make a hearth.

Note: This process really killed the teeth of the saw and I’ll now need to either recycle it or sharpen the teeth.

I tried an experiment to see if the boards could be joined together using more concrete. This may be possible but my results were unsuccessful there was little bonding between the concrete and the board. So I decided to use up some of the zinc sheets I had inherited.

I chopped the sheets with snips, making about 20 in total. Rather than drill these individually, I built a simple wooden jig that allowed me to clamp these to the drill table as a set. 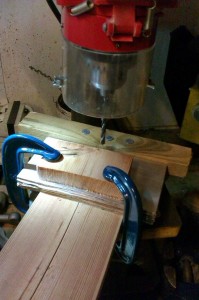 Having been warned about the dust created from these sheets I doned some protective clothing and moved everything outside. 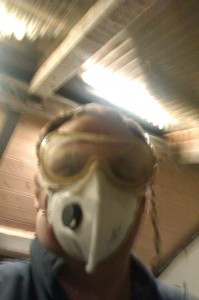 After the holes were drilled, I bolted the corner pieces onto the sheet using roofing bolts. These have a large head and a square nut. I decided it was unnessary to have plating all the way down each side as the ends were sufficiently secure. To finish it all off I gave the boards a coat of exterior paint. I was helped by my young daughter so it got a bit messy. 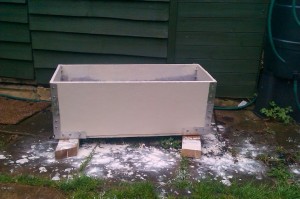 2 thoughts on “Making a Concrete Planter”