Why doesn’t everyone have a 3D printer?

“Reality is that 3D printing is falling short. Only 200K printers have ever been sold. Up to 75% of printed models are failures #AU2014” 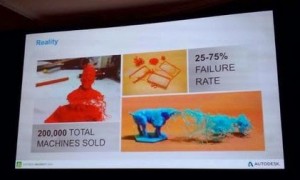 Given the number of different print models on the market and popular press on this topic, I though the number of printers would be higher. So I quizzed a few people on Twitter and did a bit of searching and found some number of 3D printers sold from 2012.

Romain Kidd @RomainKidd) the CEO of IMakr agreed that the value was in the right order of magnitude but commented that it’s difficult to know how many self built RepRap printers exist. Adrian Bower the reprap’s creator agrees with this.

Make Magazine compares 3D printers with espresso machines based on that they are both domestic machines and both have a wide range of models and prices. The difference being that the coffee making machines have sales in the millions. It also makes the logical jump 2D printers which again have massive sales in comparison. 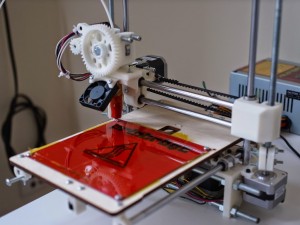 None of these articles look at the counter argument to understand why people don’t have a printer.

As a maker and repairer, I am the obvious target market for a printer so why haven’t I bought one? Probably the strongest argument is price, most printers are over £500 which is a big investment for me, particularly if I don’t know how much it would get used.
I work with a lot of materials and techniques so rarely find myself not being able to make something because I don’t have a 3D printer. A classic example of this was my spindle repairs where plastic parts were replaced with wood and metal. There are also plenty of buro services who can 3D print items for you or you can find a friendly printer owner and get something printed, which is something I’ve done in the past. The speed of 3D printing is relatively slow with complex prints taking multiple hours. A lot of printer have remote monitoring and/or can be left to print unattended so you can get on with other things whilst they print. The combination of speed and print reliability means that you can easily get disheartened when a print fails after printing for 2hrs.
My final reason is skills, all printers require some level of skill with 3D modelling, I do have basic skill in that but am out of practice at it. The cheapest printers also require a higher level of knowledge of how 3D printing process works to ensure good results. As mentioned in my review of 2014 I’ve been selected to RoadTest a CEL Robox 3D Printer so I am now a 3D Printer owner and as far as I can tell I’ve got a very good printer.

Looking at the second part of the AU2014 quote, upto 75% of prints fail, Lloyd Pennington @buffdesign asked me what point in the print do things fail, at the start or end.

Having done a few prints I am definitely close to the 75% rate at the moment but am getting more success now. 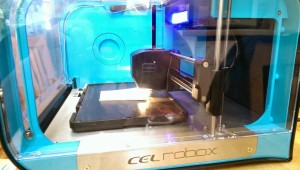 Following one successful print (with slight curling but not enough to stop it being used) my next few were complete failures with a significant problem of the PLA not sticking to the heated bed, so initially my failures have been at the start. It seems that a good start is key to a good print. 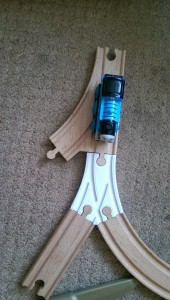 So I would say that a lot of prints fail quite early on and don’t waste much time, particularly if it’s a case of not sticking to the bed. However I’ve also printed some tall thin pieces only to have the print head knock the print over after a couple of hours. 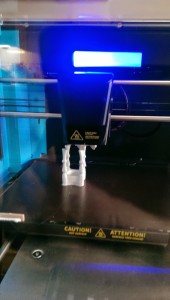 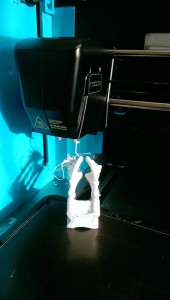 I’ve also had a print with support structures (for overhangs) where the supports fell off the bed. Luckily that model still printed ok. 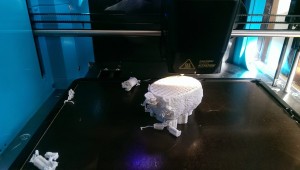 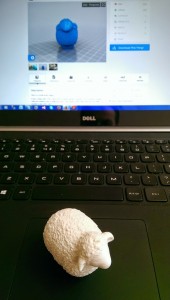 I do know of a chap who tried to print a complex model and even though it printed successfully there was so much support material on it that it took an age to remove. I’d also count that as a failure.

Uneven cooling is another reason for failures. The links below go into more details. Keeping a high ambient temperature and avoiding drafts is one solution for that. I’m also wondering if changes in the design could also help, although you are getting into some serious mathematics to understand how things cool, particularly when they are heated by an intermittent source such as a printing head. Looking at discussion forums tall structures are again vulnerable to cooling issues as the top is not being warmed by the heated bed.

As with any manufacturing process it is possible to design a model so that can be made more easily, with gradual overhangs and thought about thickness. Having a thin “top” on a part would also be something that might fail as it will get too hot. If you are copying a part made by a different process then you might need a redesign to make it more suitable for 3D printing.

There are things that the printers and software can do to help, my particular printer has an EEProm on the print cartridges so it will warn you to do a purge if you swap materials, it also provides default settings for each kind of material. There are also some quite sophisticated settings about heating and cooling the filament for different shaped structures. 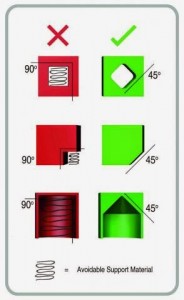 From Tips for Designing for 3D Printing – My Mini Factory

The failure point is dependent on a lot of factors, some models are going to fail to stick and will fail early on, some are going to have issues with cooling and are likely to fail later. Other models are always going to be tricky to print or have details that won’t reproduce well with this process.

So as a new printer owner, I’ll be trying to fix that 75% issue and perhaps that will in turn fix the number of printers being sold. Even based on what I know now, I’d not have bought a printer in the last year. However, the CEL Robox does seem to be a good printer to get started with but be prepared for a steep learning curve and a large initial failure rate.

4 thoughts on “Why doesn’t everyone have a 3D printer?”