Back in the 1940s the idea of “Make Do and Mend” was common, however over the last 60 years the disposable culture has slowly taken over. My friends from PSTOIC are the kind of people who will happily repair something rather than replace it and will spend hours discussing the best way to mend an old Betamax. Hence when it was heard that I had purchased a small lathe, a series of jobs was sent my way. Given that I’d not done much machining since last century I was happy to accept these tasks.

Two of these came from Rex who gave me some simple machining exercises in the form of spindles for a sellotape dispenser and a roller blind. Both these were made from plastic and probably cost a few pence to origionally make but can’t be bought for love nor money. 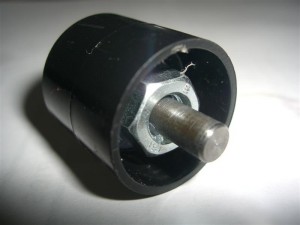 The sellotape spindle required me to drill out the remains of the old plastic that had snapped and replace it with a new steel spindle. The steel spindle was a simple job, just a straight pin with a slight chamfer on the ends so it will slip into it’s supports easily. Drilling out the plastic (on the lathe) proved problematic and the drill did not stay straight. So I drilled it slightly large and used a couple of a large nuts to provide support and simply glue gunned them and the spindle in place.

The roller blind needed me the replace the whole component and the origional was lost. Origional component was made from metal and plastic in a shape that would be difficult to reproduce in the workshop at the moment. Hence I decided that a steel pin with wood surround would be a good replacement. The pin needed to be 4mm diameter with a 6mm flange on it. Given the long lenght to diameter, I decided to use the external centre to support the end whilst machinging down to size, a slight chamfer on the end and some 3in1 oil to smooth it’s motion. It’s the first time I’d used the external centre and I quickly discovered the reason why it’s not fully round as this allows the carriage to pass underneath. I left the none bearing end rough so that it would grip the wooden outer. The wooden component was also machined using the lathe, a large tool was used, it did not give a particularly good finish but produced the right shape and was finished off with conventional woodworking tools. 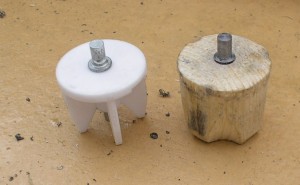 When it came to install the component, it had to have a section removed to fit the hole in the end of the blinds, something that was not possible to anticipate from the old part. But as it was wood this was a simple job.