Our king-sized bed has a metal mesh base. Over the last 7 years some of the thin tubes have got bent and the mesh is coming away from the welds. When I quizzed the manufacturer about a replacement, they said that they no longer made these and I’d need to get sprung wooden slats from my local bed shop. I would complain that it’s not fit for purpose but I expect that children jumping on the bed is not in it’s expected use pattern. And did not fancy a discussion with their support staff about how many pies I’d eaten that week.

Following a quick check on-line, I discovered that all the metal tube and mesh can be purchased to fix this. However, I’d have difficulty welding and painting it in a day and we did not fancy a night on the floor. So I decided to replace the metal with wooden slats.

I measured the thickness of the mesh base and that was just over 30mm. So it made sense to find some wood the same thickness. There are suppliers who will set you slats but none of them are that thickness and width so I was concerned that we’d just break those too. As you can see the bed does not have a central support and we like to keep a few things under there.

Having a look at the various smooth planned wood in the local B&Q the nearest options were 28mm and 34mm. There were some 96mm x 28mm x 2.1m pieces which were designed for door frames, this seemed my closest option but it would mean that I’d have quite a few offcuts, unfortunately there were no pieces at 1.8m in this size. I tried bending the planks in the shop and they seemed nice and solid. I tested them by walking on them when I got them home and despite their thickness there is still a bit of spring to them. I cut the 6 planks to length and used my trusty little surform to round the top corners. I also found some tough canvas material (and old Ikea Ektorp sofa cover) that could be cut to make the joining material. 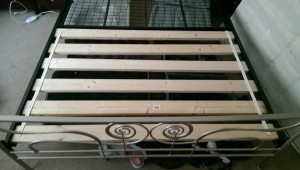 The planks were placed upside down in position so that I could staple the material in place. I probably should have used more staples but I was a bit short of them, I regretted that later as some of them came out. I also needed some big screws to hold the two end planks in place. I found some coach bolts and chopped them to length and ground a pilot point onto them. The planks were drilled with a hole the size of the core of the screw. The next job was to turn the planks over, that’s really a 2 person job, see above comment about staples. And finally to screw them in place.