“Can you put some new wheels on our footstool, the existing ones have broken” I was asked. “Sure” I said. Given that the existing wheels had broken off I knew that I’d need to add some re-enforcement as well as just repairing what was there. “Get the biggest wheel’s they’ve got”, my wife suggested as I headed into Toolstation, those turned out to be 125mm mammoth fixed casters so these were downgraded to 75mm rubber swivel wheels which suited the job much better and were still significantly beefier than the existing wheels. I also had the offcuts from the previous bed repair so nothing else needed to be bought.

The disassembly was challenging, I needed to remove lots of staples which were holding the material in place. There was also some big triangles in each corner holding the wheels that were held in place with even longer heavy duty staples. The cloth staples were removed using a bradawl and some haemostat forceps, a great tool to have in your toolbox for both disassembly and making. The corners were removed using a cold chisel and big hammer. That left me with a chipboard box with one broken corner. The existing foam padding from the top was disintegrating so that was removed. 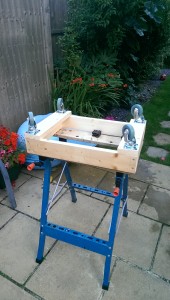 I built a simple wooden frame from the planks. It was mostly screwed together except for the cross planks which were nailed as I ran out of screws. The wheels were then screwed. The frame was clamped in place and I drilled through the chipboard. The frame was screwed in place with 3 screws on each side. The material needs re-stapling, it needs a clean and we need to find a replacement foam pad. But otherwise it’s finished.