We recently agreed to look after a relative’s dog for them and realised that we needed to make a few changes to accommodate the dog safely. One of these was making the back garden gate so that it would not be easily jumped over.

I had difficulty removing the screws holding the hinges. The gatepost was not actually attached to the ground simply screwed into the fence so I remove the gate and post together. I ended up drilling out the screws as they could not be shifted, even after repeat soakings in WD40. We’d decided to replace the gatepost with a taller one. This turned out to be a good choice as the post was pretty much rotten. I dug a hole for the new post and used a broken crowbar and a bolster to chip through 4 inches of concrete. I don’t recommend doing it this way as I managed to hit my hand with the hammer a few times. SDS drills don’t cost much so next time I’ll get myself one of those. The new post was concreted in using some concrete I’d had left over from another job. This was not sufficient so I topped it up with some postcrete. 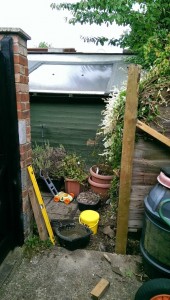 The gate was extended using two 50mm “fence posts” a batten across the top and some willow screening. The old grot and paint was removed with a pressure washer.

The framework of the gate was sawn down to make space for the posts. I drilled and chiselled a mortise in the top of each post and simply slotted the cross bar in place. The uprights were then screwed to the frame of the gate. The willow screening was then attached using some heavy duty U shaped staples. You need to be very careful with the willow as it’s so easily broken. The final steps are to give the gate and gate post a coat of preservative and to screw the gate back onto the post. One thought on “Gate modification”