I did a test assembly of my magnifier lamp and at full extension it toppled over. So a quick redesign of the base was needed. I carved out the inside with drills and chisels, and filled it up with molten lead. A stainless steel sheet was added to hold the switch and power socket. 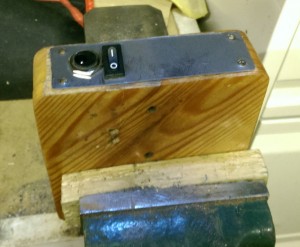 Casting lead is a dangerous job for a couple of reasons. Firstly you’ve got a hot liquid at 327.5°C, this will flow downhill burning anything that gets in its way. It’s not quite lava but you need to clear away anything flammable from your working area. The second is that lead is poisonous, this is made worse by heating and handling the material. 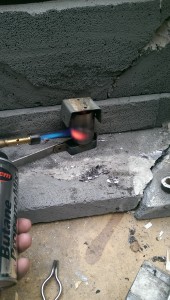 My casting and heat treatment area is a hearth made from a piece of thermalite block. It does a good job of protecting the bench under normal conditions but it’s not so good at protecting from spilt lead as it’s got a crack in it. I also used goggles and put the extractor fan on.

I made a simple stand using a stainless steel bar salvaged from a kitchen hook rack. My crucible was also stainless steel, a small pot bought for 20p from the Ikea specials area. It’s probably a bar measure. I added a simple lid from the scrap bin as I did not want my lead to turn into useless lead oxide.

I worked the torch around the crucible to heat it evenly. You can see that the metal stops glowing showing the internal level of molten lead. I kept adding till it was about half full. I forgot my usual trick of using clay to estimate the amount of material needed but had plenty.
I poured the lead into the wood base but forgot to stopper the holes so ended up having to clean up and repeat my work. I was expecting more smoke but it was fairly tame. The varnish bubbled slightly, I was going to have to re-do that anyway. After all that I then drilled and chiselled a big hole through the lead so that I had space for the electrical fittings.

For the front panel I used some 0.7mm stainless steel sheet. The rectangle was marked out with a permanent marker and scribe. I used my Bessey snips to cut the basic shape and a file to round the corner. The mounting holes were then marked, punched, drilled and de-burred. A slot for the switch was marked out in a similar way and chain-drilled so that I had a slot to start sawing from. I used a junior hacksaw and my coping saw table. 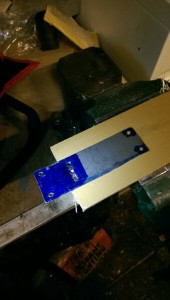 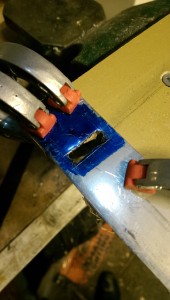 The last job was to drill the hole for the power socket. I punched that and drilled to 3mm, then 10mm. I filed to size as I did not have a more suitable sized drill bit. I also filed some washers to act as spacers so that the power socket did not stick out too far. The next task is to re-varnish the base and wire up the switch and socket.