It started with a knock on the door and my neighbour appeared with a big flat box. He’d been cleaning out a lockup and had found a dolls house kit that he’d never managed to get around to making. “Would I be interested?” he asked. It looked fairly small in the picture so I happily accepted. The kit is a “Wood Craft Assembly Victorian Cottage”, it is made from 3mm ply that’s been die cut in sheets.

The instructions were limited to “assembled the parts in order”. There was also a pictures of each of the sheets of wood with numbers against each part. These were quite small so I photographed them and then printed them out in A4 size. I labelled each sheet and then each print out so I could quickly locate the parts. The assembly was fairly straight forward the only issue was finding some of the smaller parts such as the door handles. The parts just slotted together and the major components had some additional clips that stopped the parts coming undone. The kit provided a tiny piece of sandpaper but I found that it was not needed, all the parts came out of their surround pretty clean.

There was a small note that said that you could choose to paint the wood before assembly. Given that I had little idea what parts went where painting in advance was not an option. However once I’d assembled it, I could take apart the windows and doors so those could be painted. 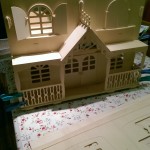 It took me about 21/2 hours to assemble the cottage. I also used some of the surounding wood to add some re-enforcement to the upper floor and roof. I also added some battens on the base to give the whole house a bit more rigidity.

Painting however took a lot longer. I decided to varnish the floors so I masked up all the walls and put down a couple of coats of exterior varnish. I decided to use white primer on the rest of the house, so after the varnish was dry I laid newspaper and masking tape over all the floors and set about systematically priming everything I could see. This took several days and showed me the sheer scale of the house. There was a lot of surface area, but I eventually coated all of the inside and out. The front fence was particularly fiddly. After quizzing my daughter, she asked for the whole house to be painted pink. I decided to take this with a pinch of salt and selected grey for the roof, red for the shutters and doors and white for the woodwork. I also painted the base black. I mostly used tester pots for the painting which is a matt emulsion but for the inside walls I used the same vinyl silk we had used in our kitchen. The white woodwork was a satin that again we’d used in the house, this time for the banister and skirting for the stairs. The local paint shop provided me a nice grey for the roof in a small pot. 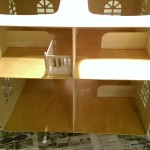 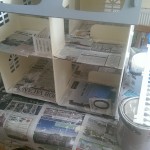 The finials, window frames, sills and shutter pivots were painted separately and glued back in. The red tester pot for the shutters and doors did not look good so I popped down to Autowize my local independent car shop and asked for “Bus Red”. The man showed me 3 very similar colours so I picked the first one. The shutters and doors had three thin coats on each side. I used the scrap from the windows to provide spacers so that my items did not stick to the newspaper. The frames and finials were glued in place and it was ready to be played with. Although it’s 1/12 scale we had a lot of 1/24 scale furniture and that works quite well. I think that it would be quite a cramped cottage if we had actually used the right size. 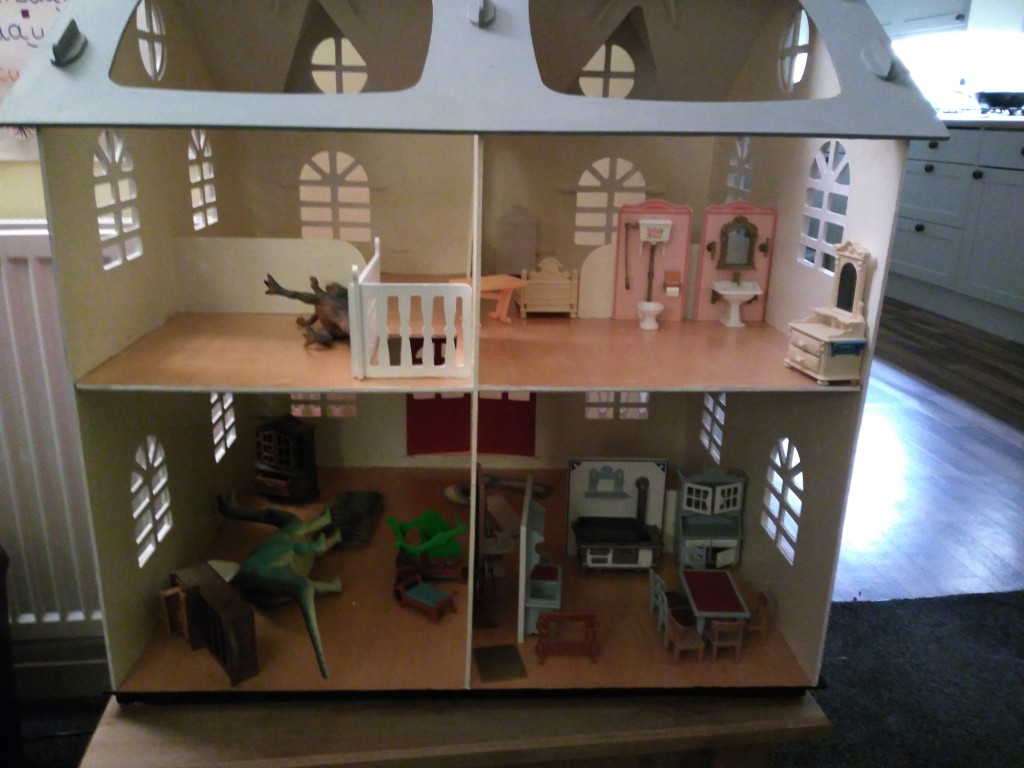 So far there’s been only one breakage, where the ladder like stairs clip into the first floor the ends broke off. My solution was to use some more of the scrap wood to re-enforce the stairs. It seems to be holding so I’ll add some filler and give it a paint. One thought on “Dolls House”