The faire was on a big site so I could have done with some transport to get around. There were many people who obviously thought the same as they brought their vehicle projects with them.

Christopher Tomko from Amateur Turbine Propulsion had brought in his Jet Powered Go Kart and an engine test rig. 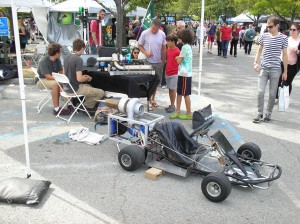 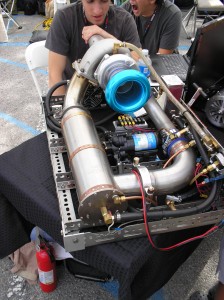 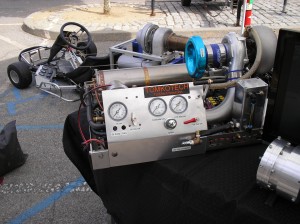 Chris comments about the jet engine “What I find fascinating about the turbine is the fact that it contains far less moving parts and performs the same task that a more complex piston engine could”.
He builds the engines from a basis of a turbo charger with welded stainless steel and machined parts. The controls and instrumentation of his latest engine are electronic so can be remote from the engine which is a good thing because they are quite noisy.

At the quieter end of the scale was the multi-user bicycles. These multiple seats in a circle each with pedals connecting to the wheels. One person had to steer. They travelled too fast for me to see how the mechanics worked. 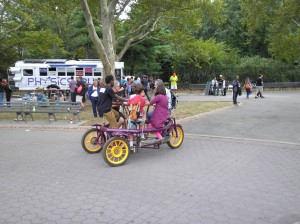 These small electric vehicles were racing around a track just next to the life sized mousetrap. There are a few key requirements for the racers. They must fit in the track, they must not cost more than $500 to make and they’d must be able to stop at the end of the track. To qualify they had to complete two laps, the first to give the drivers a chance to learn the track and the second a timed lap. The timing was done using transponders on the vehicles. I saw a wide variety of vehicles, many of these were souped up children’s toys but there were also a few scratch built. On Sunday the vehicles did a lap of the faire. One got stuck on a cable protection ramp and it took three of us to help it over. I am not sure if it was the vehicle or driver that was the weight issue. 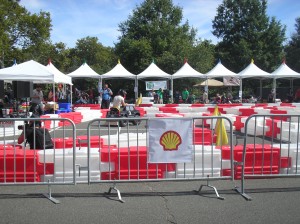 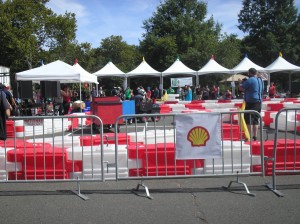 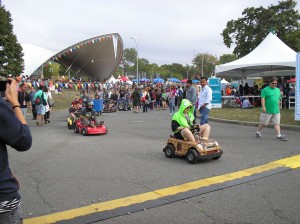 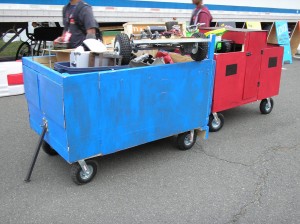 There were many other vehicle projects at the show and I did not have a chance to see them all in detail. One that I missed that is worth a mention is Ron Grosinger‘s project to convert a car to electric drive. He worked with pupils to add an engine, batteries and speed controller to a Volkswagen car. The converted car successfully transported 5 people across New York at normal road speed.